The oldest hospital in Europe was founded by a pope

Santo Spirito Hospital in Rome was opened after Pope Innocent III decided to create a place of care for unwanted babies and the very sick.

Today, hospitals are the mark of every advanced society. But back in 12th-century Rome the idea of an institution designed to host the sick was a pioneering concept. Early versions of “emergency rooms” had existed for a long time, but no structure was dedicated solely to the care and hosting of the sick and the vulnerable.

Pope Innocent III’s nightmare and inspiration for a hospital

We owe this idea to Pope Innocent III, who in 1198 called for the establishment of Europe’s first hospital on the site of a former hospice that was created in 727 to serve Saxon pilgrims visiting St. Peter’s tomb in Rome. According to tradition, Pope Innocent III decided to create the hospital after a nightmare in which he saw local fishermen scooping up dead babies from the Tiber river–a frightening but realistic vision as it was commonplace for women to abandon babies they could not care for. A papal bull from 1204 titled  “Inter opera pietatis” listed a set of 100 rules for the hospital, including rules about hygiene and medical practices. Guy de Montpellier, founder of the Order of the Holy Spirit, was appointed manager of Rome’s first hospital because of his experience in working with the sick in Montpellier, France.

The Hospital of Santo Spirito, literally Hospital of the Holy Spirit, came to function both as a place where women could anonymously surrender their babies for care and as a shelter for the very sick and children with no family. Once a week, the brothers working at the institution would go out in the streets to look for people who were very ill and take them in.

Over the centuries, the hospital became one of the most important research centers in Europe and one of the first centers that experimented with evidence-based medicine. Part of this success was due to Pope Innocent III’s set of 100 rules on how to practice good medicine, later ratified by Pope Gregory IX. Some of the studies that led to the discovery of malaria, which was a leading cause of death until the 19th century, were done here at Santo Spirito. 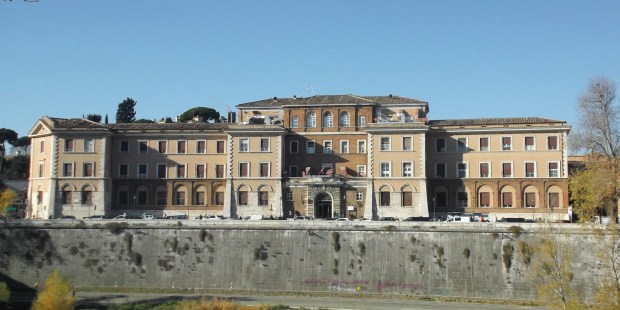 Today, one of the most impressive features open to visitors is the “Corsie Sistine” (Sistine Ward), built in 1471 by order of Pope Sixtus IV, the same pope who commissioned the Sistine Chapel. The 400-ft-long corridor is one of the best examples of Renaissance architecture in Rome, featuring an altar by Renaissance architect Palladio as well as moving works of art by students of masters such as Ghirlandaio and Pinturicchio depicting key events of Pope Sixtus IV’s life.

One of the most interesting features of the hospital, however, lies outside, in one of its walls. A foundling wheel, an elaborately designed turntable mechanism, was created to allow women to bring babies to the hospital without revealing their identities. Babies could be safely placed inside a cylinder which was then turned inward, in a revolving door style, so that people inside could pick up the infant without ever seeing the person who had brought it there.

The Hospital of Santo Spirito was functioning up until the 1970s. It’s now considered part of Rome’s Catholic cultural heritage, and recent restoration work the beautiful interior of the “Corsie Sistine ” back to life.

You can visit “Santo Spirito” on Mondays between 10 and 3:30 with tickets costing 7.5 euro.