The reason Michelangelo’s Moses has horns

As is often the case, it’s all a matter of translation.

Reading the Bible (and properly understanding it) regularly proves to be a difficult task. It requires patience and training, attentiveness to detail, some general knowledge of the contexts in which these texts were written, and the intellectual humility to admit one is frequently in the wrong. But first and foremost, the Bible needs to be read with an adventurous spirit willing to deal with its many “eccentricities.” The same goes for religious art. More often than not, we find ourselves baffled at some works of art found in cathedrals, basilicas, or manuscripts, that demand (or even defy) interpretation.

One of those is Michelangelo’s Moses. Commissioned in 1505 by Pope Julius II, the colossal sculpture strangely portrays the biblical lawgiver with two horns on his head. Even if this might seem an oddity at first sight, the choice is far from being a novelty attributable to the Renaissance genius. In fact, the motif of the Horned Moses can be found with relative ease in medieval illuminated manuscripts. It is the result —as is usually the case— of an early mistranslation, widely spread, from the Hebrew to the Latin. Once again, Jerome’s Vulgate is to blame.

“As Moses came down from Mount Sinai with the two tablets of the covenant in his hands, he did not know that the skin of his face had become radiant while he spoke with the Lord.”

The Hebrew word used to mean either “radiant” or “shining” is qaran. It shares the same root (qrn) of the word used for “horns,” qeren. In fact, in modern Hebrew, the word used to refer to a ray of sunshine is qeren, as if speaking of “the sun’s horns.” So, in a way, it is no wonder that when translating the Bible into Latin Jerome described Moses’ face as cornuta, “horned,” instead of “radiant.” This editorial choice led to the iconographic motif that plenty of artists, Michelangelo included, chose to represent the biblical figure as he came down from Sinai.

Read more:There are no “10 commandments” in the Bible

But Jerome’s translation might not be entirely wrong either. In the ancient world, horns were considered a symbol of power and authority. In fact, most of the gods of the ancient world were horned, in a clear reference to the most powerful beast on earth —the bull, the wild ox, the biblical Behemoth. Back then, horns were not yet considered to be an exclusive attribute of demons, nor associated with evil at all. Some scholars suspect Jerome was trying to suggest that Moses had been imbued with god-like strength after his descent from the mountain.

Be that as it may, most scholars agree: Jerome simply made a mistake. Actually, this is far from being the only error found in his translation. The Septuagint —the Greek translation of the Hebrew Bible— refers to the face of Moses as being “glorified” instead —a translation that seems to be way closer to the original Hebrew “radiant.” Paul seems to echo this translation when, in his second letter to the Corinthians (Cf. 2 Cor 3, 7) he writes that “the Israelites could not look steadily at the face of Moses because of its glory” —and not because of his horns.

Make sure to visit the slideshow below to discover five of the most beautiful Catholic sculptures of all time. 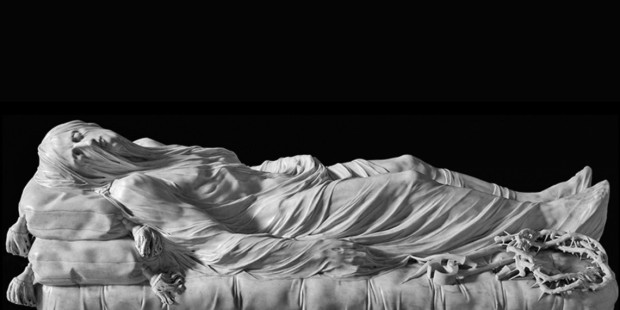