Following a pilgrimage to Salisbury, a friar reflects on the Cathedral, the Sarum Use, and a striking painting of the Last Judgment.

The English city of Salisbury was once an ecclesiastical centre known as “Sarum.” The solemn liturgy of Sarum’s great cathedral church developed its own customs and liturgical traditions from the 11th century onward.

These customs became the “liturgical use” (i.e., the liturgical customs and forms of a particular local church) of the Roman Rite that dominated medieval England until the Reformation. Indeed, it is said that in 1850, upon the restoration of the hierarchy in England, Pope Pius IX had given the English bishops the option of adopting the Sarum Use, which they declined in favor of the Roman Rite.

I have long been fascinated by the Sarum Use, which I first read about in my teens. My imagination was stimulated by a recording made by Paul McCreesh of a liturgical reconstruction of a “Sarum Rite Christmas Mass” recorded in Salisbury Cathedral, which included a booklet with liturgical notes by the historian Eamonn Duffy.

As a Dominican, I was excited to learn that several of the particular elements of the so-called Dominican Rite, which was redacted by a group of friars including an English friar and adopted universally by the Order in the 1250s, are also found in the Sarum Use. For example, at the Offertory, the paten with the bread is balanced on top of the chalice filled with wine, and both are offered at the same time with one prayer.

A pilgrimage to the cathedral

During this year of ‘staycations’, when I was having some quiet time on retreat in a monastery, I discovered that Salisbury wasn’t too far away, and so one morning, after celebrating Mass in the Dominican Rite, I made a pilgrimage of sorts to Salisbury Cathedral, to the church which has a special affinity with the form of worship used by Dominican friars for over 700 years. Work on the current Salisbury cathedral in Salisbury in 1220, just a year before the Dominicans arrived in England and during the pontificate of Honorius III, the same pope who recognized the Order of Preachers in 1216; a Dominican priory would be founded in Salisbury itself in 1281.

The building of Salisbury Cathedral took place under astonishing consequences: Because of a land dispute between the bishop and the military garrisoned in the hilltop town of Sarum, the bishop gained permission to move his cathedral two miles away to a site on the plains, on land given to the bishop. The new cathedral, using stone from the old, was built in 38 years, and a city subsequently sprang up around the cathedral, which came to be called New Sarum and then Salisbury. The original (Old) Sarum with its castle and garrison was finally abandoned in 1322, and the old city was left in ruins. Without the cathedral, medieval society could not flourish; so also for us, without Christ and his Church, there can be no life in abundance.

The church of Sarum St. Thomas

While in Salisbury, I also discovered the church of Sarum St. Thomas, which is in named after the martyred Archbishop of Canterbury. The church was also founded in 1220, built very quickly for the pastoral care of the people who were working on the construction of the new cathedral.

Inside this church is a medieval wall painting of the Last Judgment, known as a Doom, and it is the largest surviving Doom in the country – all the others were scrubbed out at the Reformation, but this one, although it had been whitewashed over, has survived. It is a striking testimony to the vibrancy of medieval Catholic Faith in England, and also a reminder of the ultimate reason for all the activity involved in the building Salisbury Cathedral and in the liturgy that took place within its walls: our goal is heaven, our true homeland.

Life is a pilgrimage towards Christ

One of the features of the Sarum Use, which was carried over into the Dominican Rite, is its love of processions. The Cathedral is attached to a great cloister into which the choir and clergy processed on great feast days, and this liturgical action was yet another reminder to the medieval Christian of the fact that all of life is a pilgrimage towards Christ, who was present on the altar in the Holy Mass.

Sadly, Salisbury Cathedral, like all the medieval churches of England, is no longer Catholic and so the ancient rites of the Church (neither Sarum nor Roman) are not currently celebrated within them. But one may still make a pilgrimage to these places of Catholic foundation, and there within pray the Rosary, as I did, for the generations past who have worshiped there, and for those to come, that we Christians might also converge in faith, hope, and charity on Christ. As he prayed, “may they be one”! 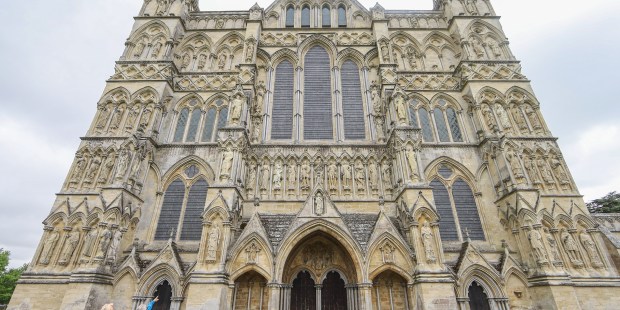