Influencer with Lou Gehrig's disease is still making a difference.

More than 230,000 users follow and encourage Paolo Palumbo on Facebook. Every day he shares about his life and ends each post with his extraordinary motto: “UP WITH LIFE!”

In every post, Paolo Palumbo shows his courageous attitude towards ALS (Amyotrophic Lateral Sclerosis, also called Lou Gehrig’s disease), which struck him five years ago. His publications regularly receive more than 10,000 interactions and more than a thousand comments, encouraging him to keep fighting against this degenerative disease that is putting him to the test every day. His post on his brother’s birthday reached more than 200,000 reactions and 129,000 comments.

His post on August 5 reveals succinctly his struggles, his gratitude, and his faith:

PAIN, LOVE AND STRENGTH! In this period of suffering, if I hadn’t the love of the people near me, if it weren’t for the faith and the strength that God gives me every day, I wouldn’t be here fighting. I must undergo this trial to the end and conquer it … You give me the fuel to keep my heart going. THANK YOU. UP WITH LIFE!

From his brother’s birthday to the “punch”: Paolo’s life in photos 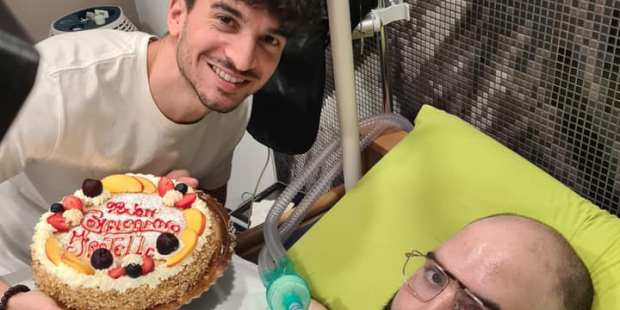 At the age of 19, Paolo Palumbo was looking forward to a future as a chef, and was already gaining professional experience in the field of gastronomy. Then he received a shocking medical diagnosis: He had ALS, a disease that usually appears in people aged 40 to 70. That made him one of the youngest people known to have this malady.

Despite the ominous prognosis, he didn’t give up. He continued to pursue his dream of becoming a chef. Unfortunately, today, just five years later, he is confined to a bed and is reliant on artificial respiration and a feeding tube. He can neither cook nor eat.

Like Paolo, more than 200,000 in the world are now living with ALS, and about 70,000 of them cannot comfortably or safely swallow ordinary food. These are not just numbers: they are people — people who have been fed bland baby food for years or who are nourished through tubes and who no longer have the possibility of eating naturally.

Still, Paolo has not given up! His ambition is to give himself and others in similar situations the joy of tasting food again. It’s a revolutionary idea that will soon become reality. He has invented a pad that, on contact with taste buds, releases the flavor of popular foods, from pasta alla carbonara to tiramisu.

The device uses a chemical synthesis of flavors obtained through molecular cooking processes, the result of experimentation currently underway at Centri Nemo in Milan. The project aims to increasingly expand the production of samples in order to create a company that can give positive experiences and hope to ALS patients and their families. In addition to restoring a sensation that patients had lost, Paolo and his family want to participate concretely in the search for a cure for ALS.

Today, Paolo’s only means of expressing himself is a voice synthesizer he controls with his eyes. A special computer allows him to compose sentences by moving his gaze around the screen.

But that’s not all he can do with his eyes. He’s piloted a drone, making a new dream of his come true. He even participated in the famous Sanremo Music Festival (Italy’s most popular song contest) last year, with a rap song he wrote and produced.

Of course, Paolo Palumbo’s health doesn’t allow him to get out much. He recently had a serious infection that forced him to be hospitalized. But thanks to his will to live, he never stops believing that dreams are still possible.

Paolo’s faith is fundamental in his life. He explained in an interview in Italian news outlet Avvenire,

Faith is the greatest gift that I have cultivated when the disease struck me, and in the most difficult moment it saved my soul. I believe deeply and I pray a lot, every day. I pray for my efforts to have meaning for humanity. I pray of course for my loved ones. As for me, praying to ask for the grace of healing would be selfish: God has a plan for all of us. If I’m in this condition there’s a specific reason and this knowledge is enough for me.