Pilgrimage to the basilica built by a hermit who became pope

The Basilica of Santa Maria di Collemaggio was founded by Pope Celestine V who is remembered for his Papal Bull of Forgiveness and for establishing the procedure by which popes step down.

The city of L’Aquila, located in Italy’s central Italian region of Abruzzo, was devastated by a pair of earthquakes in 2009. Not only were over 300 people killed in the quakes, a judge later sentenced several seismologists to prison for failing to predict it.

L’Aquila is also known for a different kind of “earthquake.” Its most well-known church – the Basilica of Santa Maria di Collemaggio – represents a historical moment in the history of the papacy.

In 1274, a hermit from Morrone named Pietro (founder of the Celestine hermitical Order) was traveling through L’Aquila on his way to France to participate in the Council of Lyons. According to tradition, he had a dream in which the Virgin Mary asked him to build a church in her honor. In 1287, the Celestines bought the land and began construction on the basilica on a hill in the outskirts of L’Aquila.

After the death of Pope Nicholas IV, a two-year conclave ensued. On July 5, 1294, the same Pietro da Morrone – now 80 years old – was elected to the papal throne. Initially, he refused to accept the office, as he was a simple, elderly hermit. However, he relented due to obedience.

Pietro was crowned pope with the name Celestine V in the basilica he had built in L’Aquila, now named Santa Maria di Collemaggio.

A plenary indulgence for pilgrims traveling to his basilica

Though his papacy was extremely brief, in one of his first acts, he created something entirely new: the issuance of the Papal Bull of Perdonanza, or Forgiveness. This bestowed the plenary indulgence to all those who came as a pilgrim to the Basilica of Santa Maria di Collemaggio in L’Aquila, confessed their sins, and received Eucharist on August 28 or 29.

His successor, Pope Boniface “borrowed” this pilgrimage indulgence as a prototype of the first official Jubilee of 1300 AD he established just six years later for pilgrims coming to Rome.

Paving the way for future abdications

Though Pope Celestine was holy and pious, he soon found himself unable to carry out the duties of the papal office, let alone deal with the political and economic intrigue both inside and outside the Church. After just four months in office, he abdicated.

But before he relinquished his title as pope, Pope Celestine created a formal process to do so. Though popes before him had stepped down, the procedure he established was a first in the history of the papacy.

The basilica in L’Aquila, a minor basilica and where Pope Celestine has been buried since 1327, is considered the highest expression of Abruzzo architecture. Upon entering the voluminous nave, visitors are amazed at its enormous, yet simple, dimensions.

It is still the site of the recent annual jubilee, known as the Celestinian Perdonanza on August 28-29. As such, a Holy Door similar to the ones in Rome during Holy Years was added to the northern wall in the 14th century.

The popularity of the saintly hermit pontiff (canonized in 1313 by Pope Clement V), the exceptional nature of his “Great Refusal” when he abdicated the papal throne, and the particularity of the L’Aquila Jubilee all led to increased visits of pilgrims to the basilica.

Following the 2009 earthquake, it underwent a restoration that ended in 2017. Afterwards, it received the European Union cultural heritage award and is also classified by the United Nation’s Unesco as a world heritage site for intangible heritage for humanity.

Pope Benedict XVI visited L’Aquila in April, 2009 after the earthquake to express his closeness to the local people. Many are aware that he visited the basilica of Santa Maria di Collemaggio and placed his Pallium (the symbol of the papal office) on the tomb of Pope St. Celestine V and left it there.

Indeed, Pope Benedict XVI resigned from the papacy just four years later, and many interpreted his gesture there as a sign of what was to come. In fact, Pope Benedict utilized the procedures established by Pope Celestine. 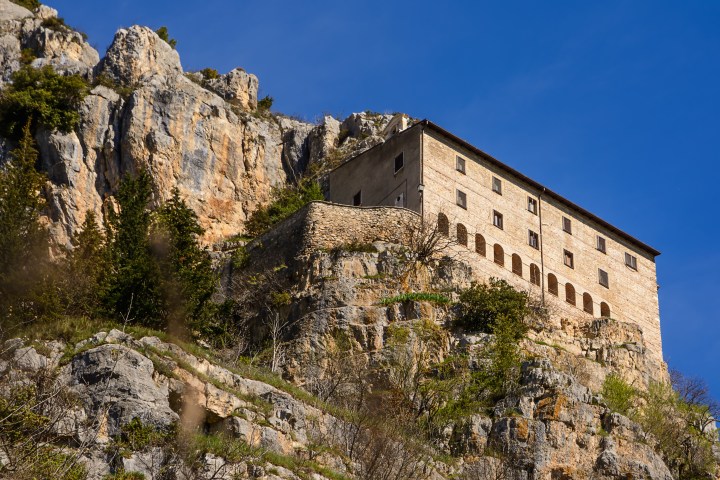 As recent rumors – very likely they are just that – regarding Pope Francis and another abdication spread, perhaps Pope St. Celestine and the Basilica of Santa Maria of Collemaggio can become a sort of prototype for what may become routine.