The shrine is located at the spot where the Virgin Mary appeared to St. Catherine Labouré.

While the Notre-Dame Cathedral is by far the best known Catholic church in Paris, the Chapel of Our Lady of the Miraculous Medal is well known to the over 2,000,000 pilgrims who come from all over the world to visit the shrine each year.

It was here, in 1830, that the Blessed Virgin Mary appeared to Catherine Labouré, and told her to have a medal made that would grant graces to all those who wear it. 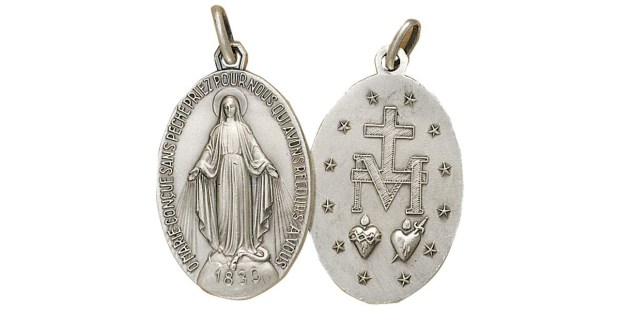 As a young novice nun living at the motherhouse of the Daughters of Charity of St. Vincent de Paul in Paris, Labouré had heard a homily about St. Vincent and was moved to pray to him that she might meet the Blessed Mother. That evening, on July 19, 1830 the Blessed Virgin appeared to Catherine to tell her that she had a mission for her.

Our Lady said, “… You will have the protection of God and St. Vincent. I always will have my eyes upon you. There will be much persecution. The cross will be treated with contempt. It will be hurled to the ground and blood will flow.”

Four months later, Our Lady appeared again, as an image standing upon a globe inside an oval frame, with the words “O Mary, conceived without sin, pray for us who have recourse to thee,” written around it.

The image turned, and on the reverse side was the letter M with a cross and two hearts, one crowned with thorns, and the other pierced with a sword.

Mary said to Catherine, “Have a medal struck after this model. All who wear it will receive great graces; they should wear it around the neck.”

Catherine pleaded with her confessor, Father Aladel, to help her make the medals.  In June of 1832 the Daughters of Charity began to distribute the first 2,000 medals. At the time, Paris was enduring an outbreak of cholera that had already claimed 20,000 lives. When word spread that a number of patients had been cured, the medal became known for its “miraculous” power.

Located in the heart of Paris, in the 7th arrondissement a 140 rue de Bac, the Chapel of Our Lady of the Miraculous Medal can be found at the end of a courtyard, behind the Bon Marché department store.

The chapel is now open and Masses are celebrated daily. Visitors may also receive the sacrament of Reconciliation and pray the Rosary. For dates and times, visit the chapel’s website.

The incorrupt body of St. Catherine can be found in a glass coffin located next to the altar. The heart of St. Vincent de Paul is also kept in the chapel.

Read more:St. Catherine Laboure: The beautiful story of a girl, her mother, and the Miraculous Medal
Read more:Gold-winning Filipina Olympian shares her Miraculous Medal for the world to see 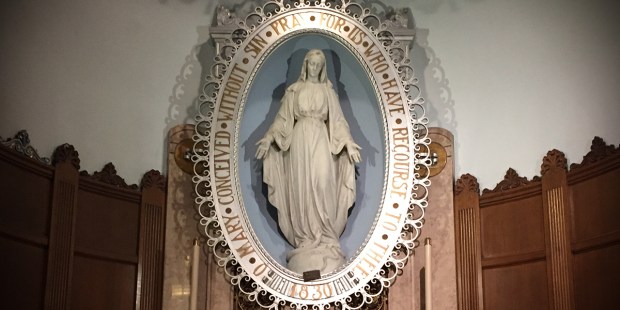 Prayer for this evening
Top 10
1
Agnès Pinard Legry
Three brothers ordained priests on the same day in the Philippine...
2
Zoe Romanowsky
How to love people you don’t really like
3
Philip Kosloski
A scientist describes the Miracle of the Sun at Fatima
4
Philip Kosloski
How the violence in ‘Squid Game’ can impact your soul
5
Margaret Rose Realy, Obl.OSB
The ‘Tree of Death’ haunts many a cemetery
6
Zelda Caldwell
Now there’s a computer font based on St. Teresa of Avila’s handwr...
7
Cerith Gardiner
Archbishop gives little girl a beautiful response about why God a...
See More
Newsletter
Get Aleteia delivered to your inbox. Subscribe here.