Before Francis, Gregory III (pope from 731 to 741) was the last non-European pope. There were five Syrian popes before him.

Everybody knows Pope Francis is the first Latin American pope. Less known is the fact that he is the first Christian from outside Europe to become pope in 13 centuries. Before Francis, Gregory III was the last non-European pope —and one of the five Syrians to have ever been named Peter’s successors in the history of Christianity.

The first Syrian pope (and the eleventh pope in the history of the Church) was St. Anicetus. Born in the Syrian town of Emesa (which is Homs today), his reigned for 11 years, from 155 to 166. According to Irenaeus, he definitely confirmed the celebration of Easter on Sundays for Roman Catholics — but still allowed the Church of Smyrna to celebrate it on the 14th day of Nisan (the first month of Spring according to the Jewish calendar), regardless of which day of the week this date fell upom. The Liber Pontificalis also states Anicetus forbade priests from having long hair, perhaps to distinguish them from the Gnostic heretics, who did.

Five centuries later, in 685, John V was named pope. Born in Antioch, he had a papacy that was brief but rather prolific in political terms: he died in his bed after a pontificate of little more than a year. Being the first in a line of 10 consecutive popes of Eastern origin, he managed to reconcile the city of Rome with the Byzantine Empire, to ratify peace treaties between Greeks and Arabs, to increase the economic resources handled by Christian authorities, and to appoint Roman bishops in various Mediterranean islands.

Two years later, in 687, St. Sergius I was appointed pope, thus becoming the third Syrian bishop of Rome. Also born in Antioch, he is credited with introducing the Agnus Dei into the Mass, and with instituting the procession for Candlemas, the feast celebrated on February 2, commemorating the Virgin Mary’s visit to Jerusalem to present Jesus as her firstborn. Although born in Palermo (Sicily), Pope Sergius I belonged to a Syrian family.

Seven years after his death, the Chair of St. Peter was again occupied by a Syrian, Sisinnius, born in Syria in the year 650 and elected pope in 708. His papacy is one of the shortest in the history of Christianity: he reigned for only 21 days, and is mostly remembered for raising funds to restore the Roman walls — a restoration carried out by Gregory II a few years later.

After his death, Sisinnius was replaced by another Syrian: Constantine I. Some historians believe they were brothers. Born in the ancient city of Tyre (currently Lebanon, but then still part of the Syrian Rashidun Caliphate), he was supreme pontiff from 708 to 715. His was the last papal visit to Constantinople until 1967, when pope Paul VI went on an Apostolic Trip to Istanbul, Ephesus, and Smyrna.

Gregory III is the last in the list of Syrian popes. Born in Syria in the days of the Umayyad Caliphate, he was pope from 731 to 741. He was the last pope from a non-European country until the consecration of Jorge Mario Bergoglio, the Argentinian Pope Francis, in 2013.

Make sure to launch the slideshow below to discover the ancient beauty of Syria’s “forgotten” churches. 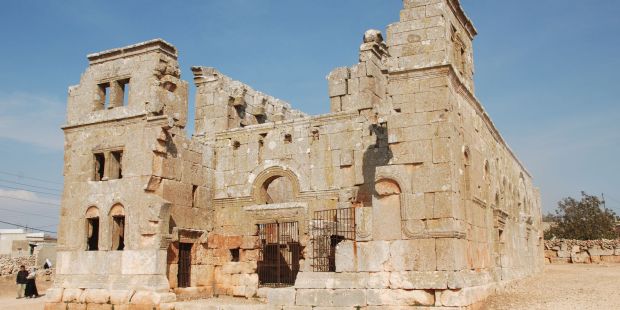