A journey to the shrine of St. Padre Pio

San Giovanni Rotondo was the home of St. Pio of Pietrelcina from 1916 until his death in 1968.

When Padre Pio arrived in San Giovanni Rotondo in 1916, it was a remote village in the Gargano Promontory where farmers and herders eked out a living. The nearest cities –  Foggia in the plains to the southwest and the port city of Manfredonia to the southeast – were accessible, but hard to reach due to the harsh mountain roads. The pilgrimage city of Monte Sant’Angelo was closer, though across the wild Foresta Umbra.

Home to Padre Pio and the Capuchins

Seeking relief for his lung ailments in the cool mountain air, Padre Pio had been sent by his superiors to join the small Capuchin community in the lonely 16th-century friary about two kilometers (1.5 miles) from the old town.

Immediately upon arriving in the remote location among craggy rocks and vineyards, the young priest knew he would spend the rest of his life there.

Today San Giovanni Rotondo has been completely transformed. The same old church is at the center of a bustling sanctuary complex and is surrounded by a large hospital, innumerable hotels and restaurants, and souvenir shops. Millions of pilgrims and patients come here each year. All is due to Padre Pio and the hospital he founded, as well his sanctity.

An itinerary through the complex begins at the old church, known as the Chiesa Antica. Here, Padre Pio celebrated Mass in a side altar for four decades.

In the rear of the church is the confessional where Padre Pio heard women’s confessions; just inside the sacristy are two confessionals where he confessed the men.

Annexed to the old church, and accessible from within, is the newer, larger church of Santa Maria delle Grazie (St. Mary of Graces). Due to the holiness of Padre Pio and the large crowds that were coming to see and hear him, construction was begun on it in 1956; it was consecrated three years later.

A tour of the shrine

When Padre Pio died on September 23, 1968, his body was originally interred in the crypt beneath the church of Santa Maria delle Grazie. From here, a walkway begins with photographs of the saint’s origins in Pietrelcina. Photos include his parents, his childhood home, and the church where he received his first sacraments.

A flight of stairs (or elevator ride) up one floor leads to a room displaying more relics and vestments worn by Padre Pio. Taking up an entire wall are shelves filled with thousands of letters mailed to Padre Pio in one year alone.

Next is a corridor with more photographs, vestments, and relics. Of note is a life-size picture of Padre Pio standing with his stigmata visible. It was taken under holy obedience, just after he received the wounds.

The corridor leads to Padre Pio’s cell, where he lived the final years of his life and died. It has been left exactly the way it was the day he died, and all the items are labeled.

Finally, the corridor passes the choir above the ancient church with a wooden crucifix. Here, on September 20, 1918, Padre Pio received the visible stigmata that remained on his body until his death in 1968. The wounds never healed, in fact, until he died.

Within the sanctuary, there is an English-speaking office. Visitors can watch several short videos about Padre Pio and the sanctuary (narrated in English) as well as venerate a glove worn by the saint. (As this office is somewhat difficult to find, go to the sacristy and ask directions; it is close by there.) 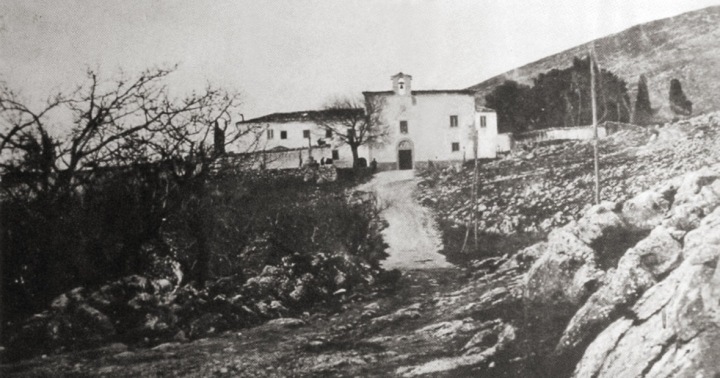 A visit to the new church

After exiting the old sanctuary, visitors can go to the sprawling new church behind Santa Maria delle Grazie. Known as the Padre Pio Pilgrimage Church, it was completed in 2004. Designed by the world-renowned Italian architect Renzo Piano, it is an example of ultramodern architecture and can accommodate up to 6,500 people inside and 30,000 people in the plaza leading down to it.

Of note are the extraordinary mosaics along the ramp leading down to the crypt of Padre Pio. Designed and realized by Jesuit priest and artist Fr. Marko Rupnik and his team, the mosaics are a unique blend of contemporary art and spirituality.

The images down the ramp relate the story of Padre Pio on the right side with associated images of St. Francis of Assisi on the left. Inside the tomb, the mosaics depict scenes of the life of Christ.

In 2008, the sarcophagus of Padre Pio was opened and his body was found to be partially decomposed. His face was preserved and repaired with a silicon mask covering. At that time, his remains were moved to the crypt in the new church and placed on display. Presently, during the pandemic, his body has been returned to the crypt in Santa Maria delle Grazie.

The hospital founded by Padre Pio

Beyond the sanctuary complex, pilgrims to San Giovanni Rotondo can join a guided visit of the hospital founded by Padre Pio, the House of Relief of Suffering. Other pilgrimage sites include the modern Way of the Cross (Via Crucis) on the hillside behind the hospital, and the house of Mary Pyle – the American benefactress and spiritual daughter of Padre Pio.

The miracles and graces pilgrims and visitors often receive through his intercession today are a testament to what Padre Pio said frequently while he was still alive: “After my death I will make more commotion: my real mission will begin after my death.”