Exclusive photos: Massive crowds flock to the PA capital for its 1st official March for Life

Pro-lifers greet members of the House of Representatives on their first day in session.

On the Pennsylvania House of Representatives’ first day back in session, nearly 10,000 pro-lifers greeted them at the State Capitol with the first Official March for Life event. One event supporter exclaimed, “I hoped there’d be a lot of people, but I had no idea there’d be this many!”

This new event is the third such “state march” that has taken place this year. Marches in Virginia and California paved the way. And according to event organizers, this is just the beginning. The state marches are a way to expand the pro-life message to reach numbers beyond what the National March for Life does. 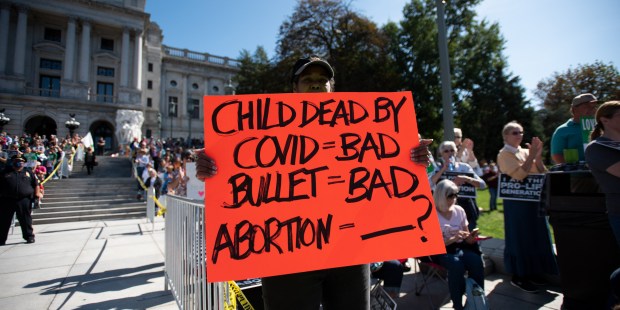 “We are proud to host this first-ever Pennsylvania March for Life and to be joined by so many remarkable pro-life leaders who, in their own ways, work daily to build a culture of life. We hope this event will energize the people of Pennsylvania to help shape local policies that respect the rights of the unborn,” said Jeanne Mancini, President of March for Life Defense and Education Fund.

“Since the 1973 Roe v. Wade U.S. Supreme Court abortion decision, well over two million unborn babies have lost their lives to abortion in Pennsylvania alone,” said Michael Geer, president of Pennsylvania Family Institute. “Every day in our commonwealth, the lives of over 80 unborn babies are taken through abortion. And that’s why we march. It’s time for this to end.”

The day began with the Celebration of Mass at St. Patrick’s Cathedral by Bishop Ronald Gainer. It was followed by a rally on the steps of the state capitol building. Speakers included Jeanne Mancini, Ryan Bomberger, and several leading pro-life representatives.

Pro-lifers then took to the streets and marched around the Capitol with the hallmark enthusiasm that has come to define the movement.

At the conclusion, former Students for Life group president and current Pitt research student Elena Liguori offered this invitation. “See where the Lord is calling you to take a stand. To my sisters, the pro-life movement needs women to show the world what truly empowered women look like. To my brothers, we need good men to protect the dignity of human life, both born and unborn. The Lord will supply the Grace to take action … be not afraid … and always be love.”

For more information about the March for Life’s State and National Events visit: https://marchforlife.org/