The iconic painter was born 450 years ago today.

Michelangelo Merisi, known to most of us as “Caravaggio,” was born on September 29, 1571 in Milan, Italy, to parents who were from the small town of Caravaggio. In the span of his 38 years long life he revolutionized painting with innovations like a unique use of chiaroscuro — with dark shadows contrasting with dramatic areas of light — and a deep sense of realism that later inspired the Baroque movement. But most of all, he developed such an iconic style that most of us can probably look at a painting and know if it’s a Caravaggio, or Caravaggio-inspired.

Merisi spent the first few years of his life in Milan, studying painting, and later moved to Rome, where his early talent impressed Cardinal Del Monte, who introduced the young painter to other high-profile Catholic figures who became commissioners of some of Caravaggio’s best work.

In the long list of masterpieces he left behind, both secular and religious works stand out. But it is perhaps in his religious works that the artistic transition of the master is more evident. Caravaggio is, in fact, known to have changed his style after harsh personal life experiences led him to reassess his outlook on life. In May of 1606 Caravaggio took part in a deadly brawl in Rome and was charged with murder. He fled to Malta, in search of asylum from the Order of Saint John, a Catholic order dedicated to helping the sick and the poor. The order commissioned some of the most important late life works of the Milanese artist. It is in these works that we notice the shift in Caravaggio’s art, from a strong focus on aesthetics to an interest in the spirituality of his subjects, which critics believe was motivated by his own introspection.

From “Saint Francis of Assisi in Ecstasy” to “The Beheading of Saint John,” here is a slideshow of the most important Catholic art works by the Baroque master, Caravaggio. 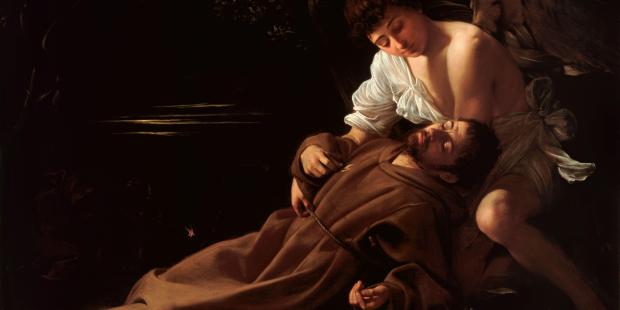