It is no wonder that we continue to find him inspiring, eight centuries after his time on earth.

St. Francis was born in Assisi during the winter months of 1181-82. His father, Pietro di Bernardone, was a successful cloth merchant respected for his business acumen, but feared due to his temper. Francis’s mother, Pica, was a pious woman from southern France.

In his youth, Francis was known throughout Assisi for his carefree personality and charming disposition. The Legend of the Three Companions, one of the early Franciscan writings, described Francis’ youth as marked by feasts, merriments, and carousing with his companions – a lifestyle not uncommon to the young men of his status. He was well-liked, talented, and seemed fated to worldly greatness.

Francis, in fact, believed he was destined to knighthood. He was fascinated by the tales of traveling minstrels who sang of the legends and heroic deeds of the great knights. He dreamed of being counted one of them. He would prove himself on the battlefield which would lead to knighthood and worldly nobility.

Francis fought with the Assisi troops in a battle against neighboring rival city, Perugia. Instead of achieving the glories of nobility and knighthood, Francis was captured, and he languished in a Perugian dungeon for one year. After his father paid a ransom, he was released.

Though he suffered greatly in prison, his thirst for worldly glory had not yet been extinguished. This time, Francis had a dream in which he saw himself the master of a glorious palace filled with arms and men he would lead in battle. He believed it was a sign he was supposed to fight yet again, so he set out to join a crusade on behalf of the pope against the excommunicated German emperor. This time, however, Francis never made it to the battlefield.

After one day’s journey from Assisi, he was overnighting in Spoleto with others headed to battle with him. As he fell asleep, Francis heard a voice ask him if it was better to serve the Lord or the servant. Recognizing something distinct about this voice, Francis understood it was the true Lord speaking to him, and he listened.

The next morning, he abandoned his plans for knighthood and returned to Assisi to seek the will of God. Once home, Francis became aware of an interior emptiness and he began to pray in caves and isolated places around Assisi.

In the run-down church of San Damiano, he once again heard Christ speak to him, this time from the crucifix. Christ said, “Francis, Francis, go and rebuild my house, which you see is falling into ruin.” He took cloth from his father’s warehouse and sold it in Foligno for money to rebuild the church.

In a pivotal moment, Francis embraced a leper. In the words of his first biographer, Thomas of Celano, “What before had seemed delightful and sweet had become unbearable and bitter; and what before made him shudder now offered him great sweetness and enormous delight.” He soon began serving and caring for lepers in the leprosaria in the plains below Assisi.

Enraged by Francis’ behavior, his father Pietro accused him of stealing. Before the bishop and townspeople, Francis renounced the security of his father’s house and his former way of life, declaring that from that moment forward he had only one Father: “Our Father who art in heaven.”

Francis then took on the life of a penitent. He left Assisi for Gubbio where he stayed for several months and served lepers.

He soon returned to Assisi to repair the church of San Damiano and later two other dilapidated country churches in the valley, St. Mary of the Angels and St. Peter in Spina.

In 1208, he discovered his vocation to Gospel poverty. It was on the feast of St. Mathias; the Gospel reading was: “Take no gold, nor silver, nor copper in your belts, no bag for your journey, nor two tunics, nor sandals, nor a staff” (Matthew 10:9-10). He then substituted his leather boots for crude sandals, his leather belt for the penitent’s cord.

Others were struck by his example and the joy he exuded, and began following him. The first followers were Bernard of Quintavalle, Peter Catani, and a simple farmer named Giles. They lived together in an area known as Rivotorto where they worked for alms, prayed together, and served lepers in the nearby leprosaria. When asked who they were, they responded, “We are penitents from Assisi.”

In 1209, when the brothers numbered 12, Francis went to Rome to request papal recognition for his novel form of life. In a momentous encounter, Pope Innocent III conceded oral approval to the friars’ way of life and gave them a new name: the Order of Friars Minor (Lesser Brothers).

The brothers returned to Assisi and lived in huts around the small church of St. Mary of the Angels, also known as the Portiuncula. This became the headquarters for their new order and remains the Mother Church of the order to this day.

For the next 20 years, Francis became a larger-than-life figure attracting more than 5,000 men into his order. He traveled everywhere throughout Italy and beyond preaching penance, negotiating peace, working miracles, serving lepers, and praying in hermitages.

In another momentous encounter, he went to Egypt to preach to the Islamic sultan. It was the height of the Crusades and Francis wished to bring peace. Though the sultan did not convert, he conceded custody of the Christian sites in the Holy Land to the friars. As safe passage for Christians to the holy sites was one of the reasons for the Crusades, this helped bring peace.

Toward the end of his life, at a mountain hermitage in Laverna, an extraordinary event took place. St. Francis was visited by a seraph who imprinted the wounds of Christ on his hands, feet and side. This was the first documented reception of the stigmata in the history of Christianity.

Read more:St. Francis might have been the first to receive the stigmata

Two years later, on the night of October 3, 1226, Francis died peacefully on the bare ground behind his beloved Portiuncula. Just two years later he was canonized a saint by Pope Gregory IX. The next day, the pope laid the foundation stone of the basilica to be built in his honor.

Though St. Francis lived some eight centuries ago during the High Middle Ages, he remains one of the most popular saints in the Catholic Church today. His example and the way he lived his Christian life continue to inspire people today.

Bret Thoman is a Secular Franciscan who has written numerous books about St. Francis and St. Clare. His latest book, A Knight and a Lady: A Journey into the Spirituality of Saints Francis and Clare, is available on Amazon. 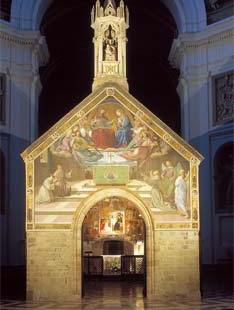