The four heads of John the Baptist

There are at least four relics believed to be John the Baptist’s head. One of them is in a mosque.

All four canonical gospels (and also the apocryphal “gospel of the Nazarenes”) present John the Baptist as being an itinerant, hermit-like preacher living in the semi-desert vicinity of the Jordan River in the early 1st century. In most Christian traditions, John the Baptist is also known as the “last prophet of the Old Testament,” the “forerunner of Christ,” or the “glorious prophet.” He is also mentioned five times in the Quran, and Muslims revere him as the prophet (Prophet Yahya) who heralded the coming of Isa ibn Maryam —Jesus, son of Mary.

It is no wonder then that one of the heads considered to be that of the Baptist is preserved in a major mosque in Damascus —the great Umayyad Mosque.

Christian scripture tells the story of how John was sentenced to death and subsequently beheaded by Herod Antipas around the year 30, after John rebuked him for divorcing his wife Phasaelis and then unlawfully wedding Herodias —who had previously been married to his brother, Herod Philip I. The testimony of the Gospels is echoed by Josephus, who also mentions John in the Antiquities of the Jews, and states that he was executed by order of Herod Antipas in the fortress at Machaerus —on a hilltop in Madaba, Jordan, around 16 miles from the eastern shore of the Dead Sea.

Read more:The beheading of St. John the Baptist in art

The Gospels of Matthew (Matthew 14:1–12) and Mark (Mark 6:14–29) recorded that Herod Antipas initially resisted killing John, because of his status as a holy man. But after his stepdaughter (Salomé) danced for him at his birthday party, he offered to give her anything she desired. Prompted by her mother (who resented John’s judgment of her marriage), Herodias’ daughter requested the head of John the Baptist on a platter.

And that’s the last we hear of the Baptist’s head. At least, from canonical sources. Josephus does not mention where John the Baptist was buried (in fact, he does not even say he was beheaded). We do know from the Gospel of Matthew that John’s disciples “came and took away the body and buried it, and went and told Jesus” (Matthew 14, 12). One tradition (among many) holds Sebastia (a relatively small Palestinian village, known to be one of the oldest continuously inhabited places in the region) to be John’s burial place. But this is just one of many. At least four different traditions point at four other locations as being the resting places of the murdered saint’s head: Rome, Amiens, Munich, and Damascus.

Like other major quasi-legendary Christian relics (think, for example, of the Holy Grail or the Spear of Longinus), the head of John the Baptist quickly gained an almost mythical, larger-than-life stature over the centuries, due to the prophet’s importance not only for Christians but, again, for believers of other monotheistic Abrahamic faiths.

Read more:These are the ruins of the fortress where John the Baptist was executed

Different monasteries in Istanbul, Egypt, and Montenegro (among others) claim to have some of the Baptist’s relics. In fact, his right arm and right hand, with which he baptized Jesus, are still kept in the Topkapi Palace Museum, in Istanbul. The story goes that the head of the Baptist that is preserved today in Amiens was originally in Istanbul (then Constantinople) alongside this right arm, but the noted Crusader Wallon de Sarton brought it with him to France in the year 1206. The cathedral of Amiens was then built to house the relic, and immediately became a major pilgrimage destination. That’s head #1.

The minor basilica of San Silvestro in Capite, in Rome, also has a head of the Baptist. The church, dedicated to Pope Sylvester I (hence, “San Silvestro”) was built in the 8th century as a shrine to keep relics from saints and martyrs originally held in various Roman catacombs. Contrary to what one might think, the name “in capite” does not refer to the Baptist’s head. Whereas it is true that capite means head in Latin, it can also be translated in many different ways. In this case, “capite” means either first or in chief, referring to the canonical title of Silvester the First. The purported head of the Baptist is kept in a separate chapel to the left of the main entrance of the basilica. That’s head #2.

The third alleged head of the Baptist is kept not in a church, but in the Residenz Museum of Munich, Germany. The Munich Residence has been open to the public as a museum since 1920, and is considered to be one of the most important palace museums in Europe nowadays. The building belonged to the House of Wittelsbach, who governed Bavaria first as dukes, from the 17th century onwards as electors, and from 1806 to 1918 as kings. One of these dukes, Duke Wilhelm V of Bavaria, collected a number of relics in the mid-16th century, the Baptist’s head among them.

The fourth head is kept in the Umayyad Mosque —better known as the Great Mosque of Damascus. Located in the “old city” sector, it is one of the largest and oldest mosques in the world, and the fourth holiest site of Islam, because of its historical and eschatological implications: the mosque is believed by Muslims to be the place where Jesus will return before the End of Days, and the mausoleum containing the tomb of Saladin is in a small garden, by the north wall of the mosque. After the Muslim conquest of Damascus in 634, the mosque was built on the site where a Christian basilica dedicated to John the Baptist already stood. In it, according to tradition, the head of the Baptist was already preserved.

However, a relatively recent discovery might seem to contradict these four traditional claims. In 2010, Bulgarian archaeologists found a reliquary containing some bones in the ruins of a medieval monastery on Sveti Ivan (Bulgarian for “Saint John”), an islet in Bulgaria’s southern coast, in the Black Sea. Because a later monastery there was dedicated to John the Baptist, the researchers suggested these were likely the saint’s remains. Moreover, radiocarbon dating and genetic testing also revealed the bones belonged to a man who lived in the Middle East in the first century. However, whereas it is conceivable that these could be John the Baptist’s remains, there is really no conclusive way to prove so.

Make sure to visit the slideshow below to discover the ways in which the beheading of John the Baptist has been artistically depicted in Christian art. 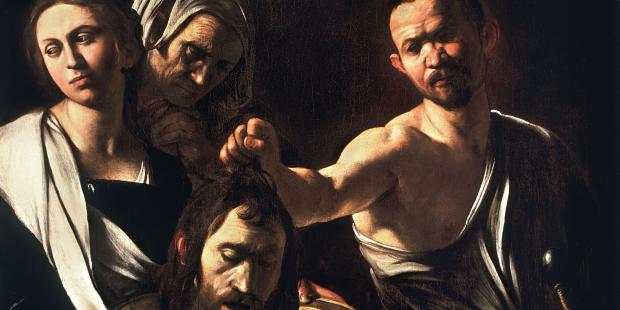