Image of breastfeeding Mary honored with ‘canonical crown’ in Florida

This very early devotion in the New World was brought from Spain and continues to thrive.

Although its pews were packed, there was a moment during Mass October 10, 2021, when the Cathedral Basilica of St. Augustine held a solemn silence as a couple processed to the altar with two gold crowns.

Silence reigned as Cardinal Carlos Osoro Sierra, archbishop of Madrid and papal legate designated by the Holy Father, picked up the smaller crown of the two and approached the humble statue of Our Lady of La Leche.

The image depicts an intimate moment as the infant Jesus is cradled by the Virgin Mary and is feeding at her breast. The cardinal placed the small crown upon the head of the infant, whose eyes are shut as he is held by his mother.

The cardinal then took the larger crown and gently placed it upon Mary’s head. At that point, the Cathedral filled with applause as the moment of the canonical coronation became cemented in memory.

Cardinal Osoro Sierra joined in the applause for the briefest moment. Then, in reflection of the humble image itself, he placed a chaste kiss upon Mary’s back. This was a coronation, but it also was an occasion to recall Mary’s sacrifice, humility, and faith-filled loyalty. The cardinal stood a few feet in front of the image and blessed it with incense before bowing in gratitude and respect.

The October 10 Mass was held in celebration of the canonical coronation, a formal act of crowning an image of Christ, the Blessed Virgin Mary, or St. Joseph in the name of the Holy Father. The crowning acknowledges that the specific image, while having local significance, also has universal importance for the Catholic Church as it pertains to Christ’s salvation through his death and resurrection.

The practice began in the 17th century but became increasingly popular in the late 1800s. Unlike an annual May crowning held in parishes and schools, a canonical coronation is different in that it honors a specific image.

Our Lady of La Leche holds a special place in the heart of the Diocese of St. Augustine in North Florida, which holds the honor of having the first Mass of thanksgiving celebrated in the New World north of Mexico.

The image of the Blessed Virgin Mary breastfeeding the infant Jesus dates back to the 16th century in Madrid, where she is called Nuestra Señora de la Leche y Buen Parto (Our Lady of the Milk and Happy Delivery). After learning of miracles associated with the devotion to Our Lady of La Leche, King Philip III wished to erect a shrine in her honor.

More than 20 years later, in 1577, early Spanish settlers brought a replica to the New World and enshrined it at Mission Nombre de Dios in St. Augustine.

While the original was destroyed during the Spanish Civil War in 1936, a replica of the original statue is currently housed in the historic chapel on the grounds that is now a national shrine and is the first U.S. Marian shrine.

Granted by the Holy See, the Canonical Coronation of Our Lady of La Leche is in response to more than 400 years of devotion to this nursing Madonna.

Bishop Felipe Estévez of St. Augustine credited this devotion to the gentleness of Mary’s maternal appeal.

“Since Mary is so tender, parents wanting a child have been very attracted to Our Lady of La Leche. A great number have gone to her and asked for a child and received it,” he said.

Cardinal Osoro Sierra presided at the October 10 Mass that was concelebrated by Bishop Estévez and Archbishop Thomas Wenski of Miami. Before the official coronation, the cardinal offered the homily in Spanish, as Bishop Estévez translated.

Cardinal Osoro Sierra recounted how the “Gospel came to these lands of Florida 450 years ago, and it is here, in St. Augustine, that the first Eucharist was celebrated.”

While the coronation had first been scheduled to coincide with the 150th anniversary of the diocese’s founding in 1870, it was rescheduled because of the COVID-19 pandemic. Yet, the spirit of the anniversary was still present because, as Cardinal Osoro Sierra said in his homily, the celebration marks that the Church “always lives in a state of mission” and in “missionary outreach.”

“We celebrate here and now that the church that walks in St. Augustine is alive and outreaching to others. … It is manifested by celebrating 150 years since the beginning of the missionary journey and renewing the call to mission. We are mission. The church is mission. And each faith is a mission,” the cardinal said. “The Church that walks in St. Augustine is aware that a Mother accompanies us in the mission: Our Lady of La Leche and Happy Delivery whom we crown as Queen and Lady of all creation.”

The cardinal recalled witnessing a strong affection and devotion to Mary in the days he spent visiting the diocese before the Mass. He reminded the faithful of Jesus’ wish to introduce all to his mother Mary – a woman of “unshakeable faith” – and asked all to imitate and always listen to and fulfill the Word of God.

The church should ask three things on the occasion of the coronation: To always live the joy of the Gospel; to help all – especially young people and the vulnerable – to discover what it truly means to be children of God; and to “rejoice in the Gospel and teach us what God tells us.”

“The spiritual movement that arose in the Diocese of St. Augustine at the beginning of its journey and mission was to fill the lives of men with God, with the style, the manner and the intercession of Mary. The best service, my dear people, you can do to people is to fill your life with the same reality that Mary filled it with, full of grace, full of God. Families, bring your children within God’s reach. Do it as Mary did,” the cardinal said. “The Gospel shows us how to let ourselves be led by God and also how to be children of God, which means living as the Son lived, following him.”

Consecrated to Our Lady

At the end of the Mass, Bishop Estévez approached the statute and kneeled before it. There, he offered a prayer to consecrate the Diocese of St. Augustine to Our Lady of La Leche.

“Our Lady of La Leche, Mother Mary! We, the bishop and his flock – the Diocese of St. Augustine – come before you with tears of joy, tears of sorrow, and with all the people and concerns that flood our hearts. We ask the Holy Spirit through St. Joseph for the grace to enter and remain within your Immaculate Heart, for it was there that the Son of the Father became Man and took on the Redemption of our flesh and blood,” the prayer began.

It can be read in its entirety here.

“In such a crucial hour of history, we are thirsting for your help. Take us into your arms and heart and embrace us with all your love. Teach us to pray and to live always in God. We love you, we trust you, and we thank you.”

At the end of Mass, clergy processed out of the Cathedral and were followed by members of the American Association of the Order of Malta who carried the statue of Our Lady of Leche so it could be returned to its chapel at the national shrine some three miles away. The faithful stood, cheered and clapped as the Blessed Mother was taken down the aisle and out the doors.

Photo Courtesy of the Florida Catholic | Fran Ruchalski
Read more:Bishop reinstating Confraternity of Our Lady of La Leche at oldest shrine of USA

That same jubilation could be heard at the National Shrine of Our Lady of La Leche at Mission Nombre de Dios. With a view of the Great Cross of St. Augustine in the background, hundreds of people gathered at the shrine to view the livestream of the canonical coronation on a jumbotron.

Following the Mass and celebration, Mary Pat and David Kulik spoke about the experience of taking up the two crowns to Cardinal Osoro Sierra during Mass. The couple has been married for more than 52 years and were accompanied by their four daughters and 17 grandchildren at the Mass. They served as chair people for the coronation campaign and were recently bestowed with the Order of Gregory the Great honor.

“I still have tears in my eyes just thinking about the experience,” Mary Pat recalled. “I was praying Hail Marys the whole walk up to the altar to keep my legs from shaking. God has given us so many gifts, and I ask, ‘Why us?’ We’re sinners.’ But, when you give, God gives you back so much more. To feel the joy and happiness, see the awe and excitement, and experience the pure love was such a gift. Participating in the coronation was a gift from God. That whole day was a slice of heaven. We’re so thankful to Bishop Estévez for what he’s given this diocese.” 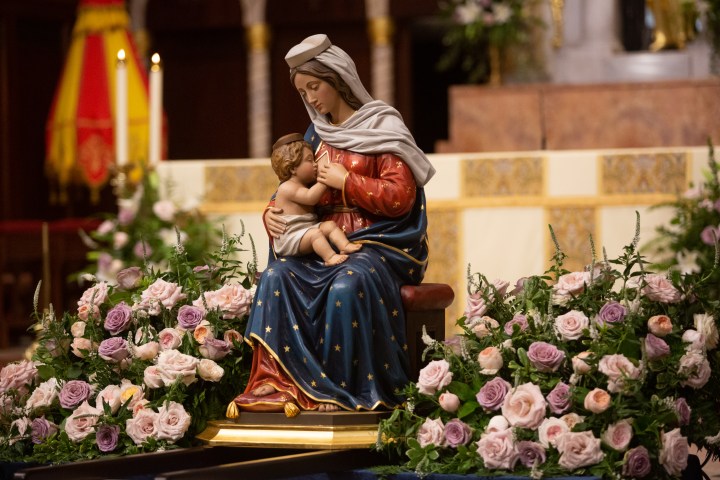 Savanna Kearney with the St. Augustine Catholic magazine contributed to this report.

This article is reprinted with the kind permission of the Florida Catholic.