Sister Gloria tells the story of her kidnapping, and Aleteia was there to hug her

Hers is a courageous and moving story, born from her missionary soul. It’s a true testimony of faith of someone who has dedicated her life to the service of God; a story of suffering, forgiveness and hope. "I always saw the hand of God and of the Virgin Mary," she told Aleteia.

Sister Gloria Cecilia Narvaez Argoty, a Colombian religious, told her story of kidnapping and freedom, and Aleteia was present to hear her heartbreaking tale. She was full of emotion, and her voice broke continuously, tears coming to her eyes. It’s the logical consequence of 4 years, 8 months and 2 days kidnapped by terrorists in the African desert, always in danger of death.

She underwent beatings, hunger, thirst, threats, chains, mockery, insults, spitting, and punishments under the hot desert sun. She suffered severe physical and psychological mistreatment. They hurt her body, but they couldn’t destroy her missionary vocation, nor did they put an end to her love for the Eucharist and perpetual adoration, which is the charism of her community, the Congregation of the Franciscan Sisters of Mary Immaculate.

“They wanted to kill me in one way or the other. They kept repeating that they wanted corpses and they made me suffer to see how much I could endure. I said ‘I will fight, but if it is God’s will that I die, may His will be done.’”

Her skin has been recovering its natural color; she talks slowly and her attitude is calm and prudent. While she shared previously unknown details of her kidnapping, Sr. Gloria Cecilia remained seated—a little hunched over, which is explained, perhaps, by the long periods of time she remained hidden by order of her captors, fleeing from those who were looking for her or from enemy groups.

The Muslims who kidnapped her in Mali and held her hostage for almost five years called her a “church dog,” the most derogatory expression with which they’re accustomed to offend Catholics. “‘It’s your religion,’ they would always say to me. In that culture women are worthless, and since I was Catholic it was worse; they didn’t respect me in any way.”

Gloria Cecilia received the insults and abuse in silence, because her motto was “Be quiet, be quiet, and be quiet, because God defends us,” a phrase repeated by Blessed Maria Caridad Brader, founder of her congregation. Sr. Gloria always wore the medal of the founder around her neck and a prayer card in her pocket.

Undeniably, her faith gave her the strength to resist and to keep quiet, serene, and at peace despite facing danger and death every day. “I always saw the hand of God and of the Virgin Mary,” she told Aleteia.

She never ceased practicing spiritual communion, and wrote prayers and letters to God with pieces of charcoal or in the sand of the dunes. “In those letters I thanked God for being alive, and told Him that He had surely allowed me to undergo that trial to be more patient, humble, and dedicated to the mission.”

She also recited the Magnificat, praying for protection from the desert storms and the gunshots that often surrounded her. She comforted herself by remembering the songs of her religious sisters and constantly repeating the psalms.

To relive in her heart the Mass, the sacraments and acts of piety, she also devoted herself to recognizing God in nature. “When I contemplated the radiant sun, the sky, the shooting stars, the moon and the animals, I thought like St. Francis of Assisi that nature is our sister and God is present there.”

A Calvary in the desert

Sister Gloria Cecilia gave a detailed and moving account of her capture, while watching television with two Colombian religious (Sofia Cortes and Clara Vega) and Sr. Adelaide, a French national. The pain of remembering that moment was palpable: “That night I heard the dogs barking and I looked out several times but saw nothing. Soon some armed men came in, and when I understood their intention to take one of the youngest, I offered myself because I was the oldest and the leader of the group.”

From then on, a true Calvary began. Chained and with something around her neck that looked like a bomb, she traveled on a motorcycle for four days. Sometimes in a canoe and other times in four-door vans, she spent entire days hiding from dangers, and withstood the dangerous sandstorms. As she observed her surroundings, she realized that she was being taken into the desert, and her hopes of being released were running out; she later learned that she was in the hands of Al-Qaeda sympathizers.

In her group were three other abducted women: Sophie Petronin, a French woman whom she cared for until she was freed; a Swiss woman; and a young Canadian woman. She was also kept captive with Italian priest Pier Luigi Maccalli. The first years they were given just five liters of water a day to drink, prepare food, and clean themselves.

The most difficult time for the Colombian sister came after the fourth year, when she ended up being the sole captive. Sophie and the Italian had been released, the Canadian converted to Islam and was able to escape, and it’s not clear what happened to the Swiss nun, but it’s possible that she was murdered. In that last year, Sr. Gloria Cecilia was not given food or water, so she cleaned herself with urine as one of her many methods to survive.

She attempted to escape several times but she was always discovered, and the abuse was worse afterwards. “Once the leader of the group arrived and began to grab me from behind.  He threw me down, picked me up and threw me down several times. I thought that maybe it was not the time for my freedom.”

Even so, she was always respectful of the culture and religion of the terrorists and never felt resentment towards them. On the contrary, she prayed for them. “In Mali, 98% are Muslims and I learned to live in the midst of differences. Besides, Allah and Jesus Christ are the same God, creator of the universe, merciful and loving.”

Her journey to freedom lasted several days, until last October 9 when she arrived to see the president of Mali and met the Cardinal of that country. From there, she went to the Vatican and to the residence of her congregation in Rome, where she stayed for a few weeks. From there, she traveled to Colombia on November 16.

Sr. Gloria Cecilia is adapting little by little to the reality she found when she was released. She says that she was always in good health, and that was one more blessing from God. She had only heard a small reference to the coronavirus when a leader said that there was a serious disease in the world that was killing many people.

Regarding the death of her mother, Rosa Argoty de Narvaez, which occurred in September 2020, Sr. Gloria Cecilia had suspected it when she received a letter signed by her brothers and sisters and not by her mother, but she only had confirmation when she was released.

She will continue to be a missionary

“God has worked a great miracle in me and has given me the opportunity to continue with my vocation, because you carry that mission within, that giving of yourself unconditionally,” she says with total conviction.

You can perceive her longing to return to serve the poor, such as those 50 orphaned children, from newborns to two-year-olds, who stayed at the home that her community managed near Karangaso. There they also taught women to read and write, taught them to sew, offered microcredit, stored grain, and provided health services.

For now, she’ll travel to Pasto (southwestern Colombia) where the headquarters of her religious province is located. She’ll meet with her family and friends, rest, and enjoy the activities they have prepared for her. She doesn’t know what God has in store for her next.

What she is sure of is that she can witness with her life, without doing great things, and she confirms this with a message sent to her by a priest who lives in Africa: “Sister, you united us more in faith. The Catholic faith in Mali has grown.”

Such is Sr. Gloria Cecilia: humble, dedicated, an example of faith and obedience, grateful to God and to all those who prayed for her. Now that she is free, she’s returned to her land and her community to continue giving witness and serving those most in need.

In the picture: Aleteia’s representative in Colombia, Lucia Chamat, with Sr. Gloria Cecilia, this past November 19. The photo summarizes how Aleteia has worked to follow her story. It all began with her kidnapping back in February 2017, and culminated with her release on October 9, 2021. It was almost five years of reporting. It happened “whether the time was favorable or unfavorable,” with dozens of articles and coverage that always sought not only to bring the reader closer to the truth, but also to bring her case to prayer when many people were forgetting her. Sr. Gloria Cecilia was released and is now with her family in Colombia. Aleteia’s virtual embrace expresses the fraternal affection of all those who are also part of this community. This is how we wanted to convey it to her, in a personal way, after she told the world the story of her ordeal. 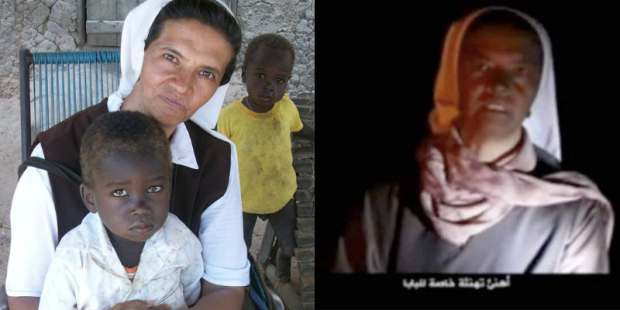