Take a peaceful retreat at Sénanque Abbey in Provence, France

The Cistercian monks grow lavender for essential oils, manage an apiary for honey and cultivate olives for olive oil, and welcome anyone who wants to take some time off for a spiritual retreat.

Sénanque Abbey built in the middle of lavender fields in the heart of Provence evokes a sense of peace, tranquillity, and inner peace. Resembling Le Thoronet and Silvacane, the other two Provencal “sisters,” Notre Dame de Sénanque stands out for its unique architecture and landscape.  All three Cistercian abbeys faced troubled times in the past, where resident monks had to leave their monasteries, churches, and working estates because of conflicts and wars.

Our Lady of  Sénanque, however, is distinctive. The abbey has once again become a working monastery housing six resident monks. Additionally, besides dedicating their lives to working and keeping their monastic tradition based on  Saint Benedict, the monks offer retreats welcoming those wanting to get away from the stress of modern living for a few days.

And with the pressures of work,  the pandemic, and a deep desire to recharge, what better way than a few days of spiritual retreat? 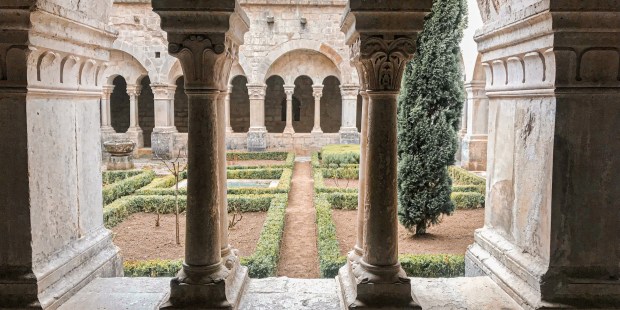 In keeping with the Cistercian order, Sénanque abbey is far away from beaches and majestic cities and towns. It is built in an isolated and narrow valley only 1 kilometer long and three kilometers wide in the village of Gordes, in the Luberon region of France.

Construction started in 1148 and took over 60 years to finish.  The monks chose this idyllic region of beautiful landscape in Provence to live and work in keeping with the teachings of  St. Benedict:  to be as self-sufficient as possible with their garden, mill bakery, etc.

Thanks to numerous donations, the abbey prospered well initially with about 40 resident monks, but sadly, this did not continue. The Wars of the Roses in 1544 destroyed their peaceful monastic life. The monastery was attacked by rebels who set fire to many buildings and got rid of valuable archives.

The revolution in 1792 caused even more disruptions: The abbey was sold off as national property for 28,000 francs leaving the monks no choice but to leave Le Sénanque. The new owner, wanting  to preserve the buildings, decided to remove all external religious signs; the cross on top of the church,  the bells, and the coat of arms disappeared.

There was some revival in 1854, but disruptions continued, and the abbey struggled to survive. Le Sénanque was sold off again in 1882 as public property, this time for 15,000 francs.

In 1889, the monks moved back into the monastery without the owner’s permission, only to be evicted in 1903.  After a period of abandonment, the French State classified some of the oldest buildings as Historic Monuments.

In May 1926, a dozen monks moved back to the abbey, reviving the community once again.

The church is aligned to the north instead of the east because of the narrow width of the valley. Following the same pattern as Le Thoronet and Silvacane, there’s no main central door as the church served only monks and laymen.

The dormitory housed up to 30 monks with steps leading down to the church and unheated at the time.

The monks keep busy with farming activities  — they grow lavender for essential oils, manage an apiary for honey and cultivate olives for olive oil, which they sell in their gift shop attached to the monastery.   Natural and authentic products made in other monasteries are also available to visitors at Le Sénanque.

Sénanque monastery is open for anyone looking for some quiet time.

The maximum duration for a stay at the abbey is eight days.

The French comedian Elie Semoun who stayed at Le Sénanque on two occasions, shared his experience with the monks at Le Sénanque.  He said that the retreat allowed him to think things over; he read lots and talked with the monks. The monks answered his questions on celibacy, and explained that they gave themselves entirely to God. The actor added that the stay did him a world of good.

St. Benedict’s motto of ora et labora – “pray and work” is indeed valued and honored at   Our Lady of  Sénanque.

See the links below to learn more about the other two of the “three sister” monasteries in Provence, France: