A Catholic love letter to Verona

The golden-hued city of Verona is one of the most beautiful cities in Northern Italy.

Located (70 miles west of Venice in the region of Veneto, Shakespeare fans will recognize Verona as the location of the storied feud between the Montagues and Capulets in Romeo and Juliet. A balcony recalls the setting of a famous scene.

Other famous sites include a Roman amphitheater. Completed in 30 AD, it is the third largest arena in Italy after Rome’s Colosseum and one in Capua. The well-preserved interior is still used to this day for shows and operas during the summer.

Due to its well-preserved urban structure and architecture dating from ancient Roman times, through the Middle Ages, and into the Renaissance, Verona was declared a UNESCO World Heritage Site.

In addition to its tourist draw, there is great religious significance in Verona. It has numerous important churches replete with magnificent works of art. 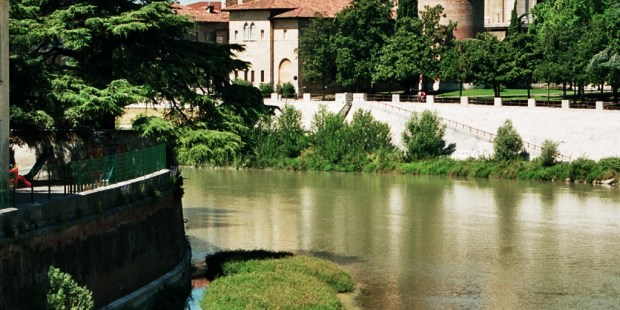 A pilgrimage to Verona

Any pilgrimage visit to Verona should begin at the Duomo (cathedral), dedicated to Our Lady of the Assumption.

According to tradition, St. Zeno – the patron saint of Verona – built the city’s first basilica in the mid-4th century in the area beneath or nearby the present-day cathedral.

St. Zeno (San Zeno) (300 – 371) was the eighth bishop of Verona. It is believed he was born in Mauretania, in Africa, and for this reason he is referred to as the Vescovo Moro, or “dark brown bishop.”

He was learned and educated in the school of African rhetoric. Numerous sermons in which he evangelized, confronted paganism, and refuted Arianism have survived.

It is unknown when and in what circumstances St. Zeno came to Verona. According to hagiographic sources, he continued to live in austerity and simplicity, so much so that he fished for his own meals in the Adige River that runs through the city. For this reason, he is the protector of freshwater fishermen.

The exterior of the present-day cathedral was built in Romanesque style in the 12th century after the ancient Christian church was destroyed by an earthquake. The interior was remodeled in the Gothic style in the 15th and 16th centuries.

Inside, the cathedral boasts Romanesque sculptures, early Christian artifacts, and important artwork. The first three chapels in each side nave house Renaissance works of art by Veronese artists. The painting of the Assumption is attributed to the famed Venetian artist, Titian.

San Zeno’s remains are contained in a crypt beneath the cathedral.

Another church, perhaps the most important medieval church in Verona, is dedicated exclusively to the patron saint. The Basilica of San Zeno Maggiore was founded in the 5th century, and is considered a masterpiece of Lombard Romanesque architecture. It boasts a magnificent Romanesque facade, fine bronze doors, and important works of art.

The current church was built on the site where St. Zeno’s tomb was placed originally. In the beginning of the 9th century at the behest of the king of Italy, Pepin (who judged it improper that the body of the patron saint should rest in a poor church), it was moved to the present location beneath the cathedral.

Around the end of the 11th century, a renovation project began leading to the current Romanesque style. Among its works of art is a masterpiece by Andrea Mantegna, the altarpiece of San Zeno.

Another important medieval church in Verona is the Romanesque Basilica of San Lorenzo. Built on the site of another ancient church, the current church dates to around 1177. It is constructed with alternating stripes of brick and stone, and has two cylindrical towers, housing spiral staircases to the women’s galleries.

Other notable churches in Verona include the Church of San Giorgio in Braida that boasts a masterpiece of Paolo Veronese, The Martyrdom of St. George.

Lastly, roughly 25 km (15 miles) from Verona is the audacious Shrine of Our Lady of the Crown (Santuario della Madonna della Corona).

Incredibly, the sanctuary is set in the face of a cliff. At 774 meters above sea level (2540 feet msl), it affords an incredible view of the surrounding landscape. Pilgrims brave enough can walk the ancient Path of the Pilgrim from the town of Belluno Brentino up to the shrine. Accessible only on foot, partly dug out on the ridge, the 600-meter climb (2000 feet) is taken by tens of thousands of pilgrims each year.