The Cross of Lorraine was the only symbol of WWII to truly counter the twisted cross of the Nazi party.

Charles de Gaulle was born 121 years ago last week. It’s just as well he didn’t rival the longest-lived person ever – 122 years for another French citizen. He described old age as “a shipwreck” and only lived to 80. Although his greatness is sometimes questioned, he was without doubt the most conspicuous Frenchman to liberate his homeland from Nazi occupation.

Part of de Gaulle’s success was due to branding. This was to some extent a consequence of his Catholicism. Instead of making a public display of his deeply held faith, it became inseparable from the symbolism of the Free French forces. 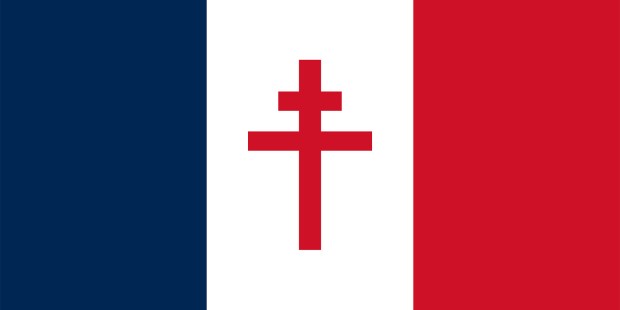 The Cross of Lorraine

De Gaulle was entirely unlike the anti-Semitic, Vichy-based French who collaborated with the Nazi occupiers. Followers of other religions were welcomed into his London-based government in exile. His symbolism was equally different. While the leader of the Vichy puppet state chose a menacing Fascist-style axe to place at the center of the French tricolour, de Gaulle used the Cross of Lorraine instead.

The cross was intended as a riposte to Hitler’s carefully considered swastika design, created by the thwarted artist himself. The origins of the Cross of the Lorraine as a benevolent response to the demonic power of the Nazi emblem are less certain.

It wasn’t de Gaulle himself who created the blueprint. He was a military man with an interest in history, but not art. The symbol itself originated far away in Hungary, following ancient Byzantine Christianity. To incorporate it into the French flag was an unlikely choice and yet a brilliant counterpoint to the perversion of the cross devised by Hitler.

Association with St. Joan of Arc

Lorraine was more than a land soaked with the blood of earlier French and German soldiers, it was also the birthplace of St. Joan of Arc. The martyr who died at 19, after leading a French army, was an astonishing daughter of the Duchy of Lorraine. For a woman to have achieved what she did was exceptional for any age. She had been trying to rid her country of the English, who had her burnt at the stake as a heretic. It was one of the greatest injustices of the interminable wars between England and France.

At least the Church of England commemorates this Catholic saint, described by Winston Churchill as “the greatest heroine of European history.” Sir Winston also thought that de Gaulle believed himself to be her successor, but then the British leader had a poor relationship with his Free French counterpart.

It was only later that St. Joan came to be associated with the Cross of Lorraine on countless medallions. Lorraine started to use this special form the cross in 1431 – the same year that Joan was executed after a year in captivity.

The search for a symbol and rallying flag

De Gaulle would probably would not have chosen the two-bar Cross of Lorraine or the more typical one-bar Latin Cross if someone else had not suggested it. In 1940, immediately after the German invasion, de Gaulle fled to London. He needed a rallying symbol and a flag that differed from the plain old tricolour that the collaborators of Vichy had continued to use. There is much disagreement about who proposed the Cross of Lorraine. It might have been Admiral Emile Muselier, the top officer of the Free French Navy. Although he wasn’t from Lorraine, his father originated from there. Or was it another naval officer, Thierry d’Argenlieu? He was Muselier’s subordinate and a much more spiritually inclined individual. After WWI he had became a Carmelite priest. When WWII happened he rejoined as a chaplain and was fast-tracked into the higher echelons of the Free French Navy. He later retired to a monastery.

The appeal of the Cross of Lorraine for most followers lay in its patriotic associations with the struggle for freedom; for de Gaulle there would have been the irresistible religious significance of a cross shape that so often housed relics of the True Cross.

It’s a symbol that hardly lives on in secular-minded France, although the 150-foot-high Cross of Lorraine memorial attracts many visitors.  De Gaulle’s own grave is marked by a plain Latin Cross with one bar. The cemetery is close to the enormous memorial and to Lorraine. The grave is very simple and has three occupants: the former president, his wife and their youngest child, Anne. Having Down syndrome did nothing to prevent this daughter from being doted on by a man who was legendarily aloof and undemonstrative when not in her company.