And as markets across Germany and Austria have to shut down because of yet another wave of COVID restrictions, there has been no better time to get to know “the other side” of Europe’s Christmas markets.

From Strasbourg, to Arras, here is a collection of the best Christmas Markets of France. 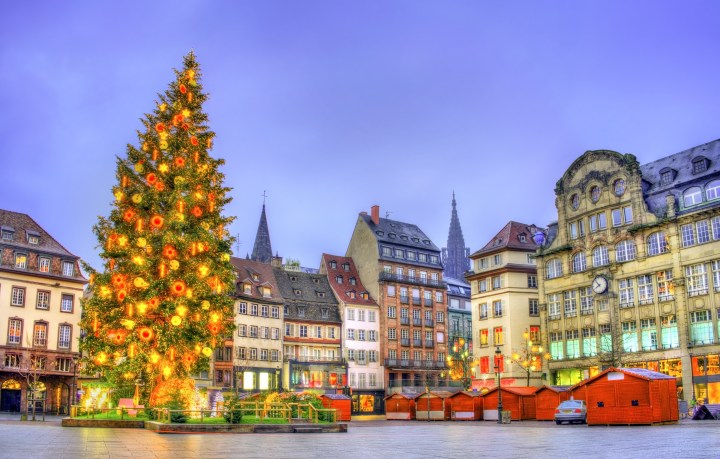 It is here in Strasbourg, at the crossroad between France and Germany, that the world’s first Christmas market took place in 1570. Known as the “Christkindelsmärik,” literally the market of the Infant Jesus in Alsatian dialect, it started when local wood shops, pharmacies and groceries put up their stalls around the cathedral in the days leading up to Christmas. In the 19th century, as more traders started to come from out of town, the market expanded to the nearby streets. Today, Strasbourg’s Christmas market takes place between November 29 and December 31 and counts 2 million visitors making it one of the most popular Christmas markets in Europe. Spread around the main cathedral as well as four squares, it hosts 300 chalet-like booths selling anything from handmade Christmas tree decorations to homemade macarons, nougat, and candied fruits.

Held each year between November 28 and December 28, the Christmas market of Reims hosts 145 vendors installed all around the wondrous “Notre-Dame de Reims” Cathedral, which is lit up for the occasion, and hosts a light show by artist Skertzò. Located just 45 minutes by train from Paris, Reims attracts 1.5 million people to its Christmas market each season. Capital of the Champagne region, Reims is especially famous for its sparkling white wine and for its ham, made with nutmeg, parsley and shallots.

In Colmar, it is the setting that steals the scene. Typical half-timbered medieval houses lined up along narrow canals are decorated with Christmas lights, festoons and holly leaves that, coupled with snow-topped roofs, make Colmar look like a fairytale town out of a Christmas carol. Located in the Alsace wine region, it is home to some beloved wines like Riesling and Gewürztraminer. The 2021 edition of Colmar Christmas market takes place between November 26 through December 29.

Amiens hosts the biggest Christmas market of Northern France with more than 130 chalet-style market stalls. They surround the UNESCO World Heritage Cathedral, which from November 6 and December 30, is lit up with white, gold and blue lights. Locals and visitors alike flock to the 1.2-mile wide market to get hot waffles, roasted chestnuts or take a ride on the carousels.

Set against the dramatic backdrop of the Grand Palace, a UNESCO World Heritage Flemish Baroque site, Arras is home to some 130 chalet-style vendor stalls selling everything from handmade wooden toys to papier-mâché Advent calendars. It is also home to an ice-skating rink, a ferris wheel and a sledding course for a full Christmas experience. Held each year between November 29 and December 30 it attracts an estimated 1 million visitors from France and the rest of the world.

View the slideshow above to take a tour of France’s Christmas markets.