#RedWeek lights up buildings in memory of persecuted Christians

All over the world buildings were lit up on November 24, and people took part in Masses, prayer vigils, processions, conferences, and concerts in support of religious freedom.

Several hundred buildings, from Sydney, in Australia, to Paris, in France, were illuminated red during #RedWeek which ended on #RedWednesday, November 24. 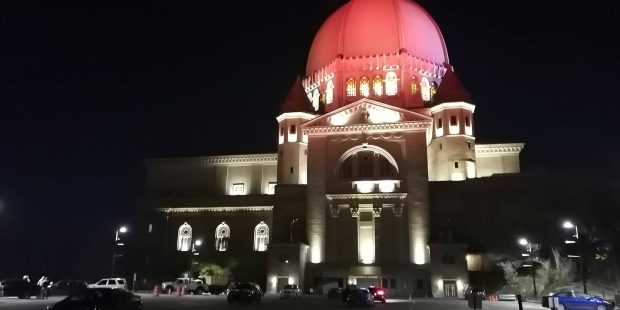 Thousands of people took part in Masses, prayer vigils, processions, conferences, concerts and other initiatives to remember persecuted Christians and raise their voices in defence of Religious Freedom.

This year many countries chose to dedicate the week leading up to November 24 to this cause, calling it #RedWeek, or Week of Witnesses, to denounce especially the plight of young girls and women in minority Christian communities who are particularly exposed to sexual violence and abuse.

To mark the occasion, the pontifical foundation and charity Aid to the Church in Need (ACN) launched the report Hear Her Cries, edited by ACN in the United Kingdom. The 52-page publication presents real cases and first-hand accounts of victims, including three women from Egypt, two from Iraq, one from Mozambique, three from Nigeria, and three from Pakistan. This report was presented during events held in the Scottish Parliament and in Westminster Cathedral, in London, as well as at a service presided over by Archbishop Eamon Martin of Armagh, in Ireland.

ACN UK also launched a petition calling on the UN and the UK authorities to take more effective steps to tackle the epidemic of sexual violence against Christian women and girls, and those of other religious minorities.

Another of the highlights of this year’s #RedWeek was the illumination in red of the Maronite Cathedral of Saint Elijah, in Aleppo, Syria, where representatives from different Christian faith communities gathered for a prayer service in memory of the suffering Church around the world. The location was particularly evocative, as the Cathedral of St. Elijah was badly damaged during the Syrian War and has been rebuilt with support from ACN.

In Colombia, the suffering of the Christians in Syria was highlighted as well, through the testimony of Sister Guadalupe Rodrigo, a missionary who lived in Syria during the hardest times of the war. Under the title “Hear their cry: women persecuted for their faith,” ACN Colombia celebrated Red Week in Medellín, in Barranquilla, and in Bogotá. In the south of the country, in Ipiales, the impressive church of Our Lady of the Rosary of Las Lajas was illuminated red, in memory of the martyrs of the Church.

For the first time Ukraine and Bosnia Herzegovina also joined the initiative: the Greek Catholic Cathedral of the Resurrection in Kiev and the Cathedral in Sarajevo were lit up in red.

Austria is a country where #RedWednesday has garnered significant public and state support. This year, besides more than 100 churches, monasteries, and monuments, at least three major public buildings were also lit up in red, including the Parliament, the Federal Chancellery, and the Ministry of the Interior.

In Germany over 120 churches – including the cathedrals of Passau and Paderborn – took part in the initiative. At different events, Christians from Eritrea, Egypt and Niger gave testimony about persecution and reconciliation, including Fr Pierluigi Maccalli, an Italian missionary who was held by jihadist militia in Mali for over two years.

In Paris, the Basilica of the Sacred Heart of Montmartre was lit up in red to raise awareness of religious freedom. A prayer vigil was organised and broadcast live on the Catholic television channel. People carrying red silhouettes as a symbol of persecuted Christians in the world took part in a procession.

The Czech Republic surpassed all previous mobilization efforts in the defense of religious freedom this year with 190 buildings illuminated in red across the territory. The program in Prague included a conference at the University of Karlova, to identify concrete ways to help the persecuted, and a nationally televised fundraising concert at the School of Music. Several Czech embassies lit up red. The commemorations are co-hosted by the Catholic Bishop’s Conference, the Jewish Council, the Ecumenical Council and the KD think tank.

In Portugal, besides several parishes, many landmarks were illuminated, such as the Christ the King statue that faces Lisbon from across the Tagus River, and the São Bento da Porta Aberta Shrine in Braga, in the north.

Christians in Poland dressed in red, held red lanterns, and took to the streets for a silent march in memory of those who suffer for their faith. Following the march, which was held in Poznan, participants heard two testimonies from persecuted Christians, as well as prayers and songs in Aramaic, the language spoken by many Christians in the Middle East. Around the country buildings and churches were illuminated in red.

At least 40 buildings were illuminated in Slovakia, including Bratislava Castle and the main cathedrals of the country’s dioceses. Many churches organized prayers for persecuted Christians.

Hungary wanted to join the initiative on an international level by lighting in red its embassies. The participation in the country was ecumenical, with the red illumination of the Reformed Great Church in Debrecen and the Basilica in Esztergom.

In Canada, #RedWeek was observed by faithful from the dioceses of Québec, Montréal, Toronto, Medicine Hat, Ottawa, and Chicoutimi. Two national shrines joined for the first time: the Basilica of Saint Joseph’s Oratory in Montréal and Our Lady of the Cape Basilica in Trois-Rivières.

In Australia three Cathedrals – Sydney, Melbourne, Hobart – were lit up in red and held either a Mass or a prayer service with testimonies from persecuted Christians.

In addition to the illuminations, many primary and high school students participated in the day of prayer for persecuted Christians, dressing in red in different countries around the world, e.g. Canada, Australia, UK or Slovakia.

The Red Wednesday initiative began in 2015 as part of the ongoing effort by Aid to the Church in Need (ACN) to call attention to the suffering and the persecution of Christians and that martyrdom for faith in Christ is not a thing of the past.