The bones of what some call "the real Santa Claus" are preserved in the Basilica di San Nicola in Bari, Italy.

Yes, Virginia, there is a Santa Claus. His real name was St. Nicholas of Myra (270 – 343 AD). His Latin name, San Nicolaus, passed through the Dutch, Sinterklaas, to give us Santa Claus in English.

In reality, St. Nicholas was a bishop, known for anonymously leaving gifts in the middle of the night. In one of the most famous legends, when a poverty-stricken man was forced to sell his daughters into slavery, St. Nicholas secretly tossed bags of coins into their home to serve as the girls’ dowry, thus enabling them to marry and be provided for. The money was said to have landed in their stockings drying by the fireplace, which is the origin of gifts in children’s stockings and shoes at Christmastime. 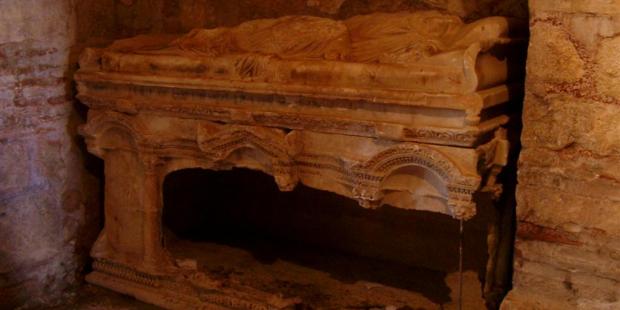 Moving the bones of St. Nicholas

After the death of St. Nicholas, his relics were interred in the Cathedral of Myra. Today, however, his bones are preserved in the Basilica di San Nicola in Bari, Italy.

After Myra was besieged by the Seljuk Turks, in 1087, the Italian maritime cities of Venice and Bari sought to bring the saint’s relics to the West. Sailors from Bari managed to arrive first and bring the bones of St. Nicholas back to their city on May 9, 1087.

Work on the basilica to hold the saint’s remains began in 1089 and was completed around 1105. It was consecrated in 1197.

Bari became an important religious center in the Middle Ages. In 1098, the city hosted the Council of Bari, in which St. Anselm of Canterbury argued in favor of the doctrine of Filioque (that the Holy Spirit proceeds “and from the Son”) against the opposing Greek view.

In 1156, Bari rebelled unsuccessfully against the Normans and was virtually razed to the ground as a result; only the Basilica of St. Nicholas was spared.

Visiting the Basilica of St. Nicholas in Bari

The basilica is a majestic edifice that became the model for later Romanesque churches throughout the region of Puglia. While the exterior of the basilica is plain, the interior is richly decorated.

It houses an important Romanesque cathedra (bishop’s throne) from the late eleventh century. It boasts precious mosaic pavements in the crypt and presbytery. The ciborium, the most ancient in the region, is also decorated with mosaic.

Two stairways from the side aisles lead down to the crypt, which is supported by 28 columns embellished with Romanesque capitals. Under the central altar of the crypt rests the body of St. Nicholas. The altar area where the saint’s relics rest is covered with a floor mosaic of exceptional wealth of materials from different geographical areas.

The basilica is unique in that Masses are celebrated in both Catholic and Orthodox liturgical rites. The Catholic Mass is held in the main nave while the Orthodox Mass is celebrated in one of the altars in the crypt below. In fact, Greek-speaking pilgrims are so frequent in Bari that street signs throughout the city are written in Greek in addition to Italian.

On his feast day, his bones emit a miraculous myrrh, which is collected and distributed around the world.

Today Bari is known for its large port served by ferries that transport passengers and cargo throughout the Mediterranean. While the Old Center of Bari was once notorious for crime and pickpockets (cruise ships often advised passengers against visiting when docked there), today it has been cleaned up and is a delightful area to visit.

St. Nicholas of Myra is the patron saint of sailors, merchants, prisoners, travelers, and most notably, children. His feast day is December 6.