These are perhaps the most realistic Nativity scenes in the world

For centuries, people of Krakow, Poland have constructed nativity scenes that feature paper replicas of the city’s buildings.

Nativity scenes are a beloved tradition across the Catholic world, but Krakow,  the capital of Poland, really stands out when it comes to the art of making Nativity scenes.

For centuries, Krakow artisans have perfected the fine art of szopka, Nativity scenes made of light materials such as wooden frames, colored cardboard, papier-mâché, and staniol, a type of thin, glossy tinfoil. What’s unique about these creations is that the backdrop of the Nativity scene is a faithful reconstruction of Krakow. 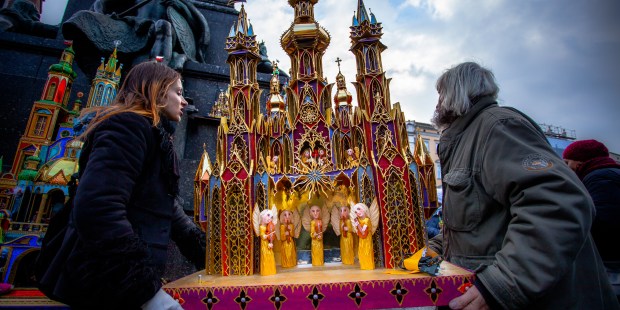 Historical buildings such as Saint Mary’s Basilica or Wawel Castle are recreated to an impressive level of detail by professional or amateur craftsmen, who spend months finishing their constructions in time for Christmas. Sitting among the multi-story buildings we find small puppets that recreate the Nativity scene, as well as stories about recent current events in both Poland and abroad, from the Man on the Moon to the World Cup.

A tradition that dates back to the 18th century

The origins of the tradition go back to the 18th century when local puppet makers from the suburbs would flock to Krakow city center and sell faithful replicas of Krakow buildings in the days leading up to Christmas. These early szopkas werealso used as theatre scenes for the performance of Christmas carols.

During December 1937 Dr. Jerzy Dobrzycki, director of the Municipal Art Propaganda Office, called for the first official competition between the most beautiful Nativity scenes by local craftsmen. Since then, on the first Thursday of December, Cracovians bring their carefully constructed szopkas to the steps of the statue of Adam Mickiewicz, a famous Polish poet, located in the Main Market Square in Krakow Old Town.

After the exhibition on the first Thursday of December, these colorful and impressively detailed Nativity scenes, some of which 6 ft tall, are moved to the Historical Museum of the City of Krakow, where they are lit up and kept on display for three months. Historians, ethnographers and artists assess the szopkas and pick a winner among the hundreds of pieces that are submitted by professionals and amateur alike.

The ancient craft is passed down from one generation to the next, but newcomers can enroll in workshops that can provide some basic skills of szopka-making. Locals and visitors alike can learn a lot about the history of Krakow by learning how and why a craftsman has chosen to represent a certain building in his or her own Nativity scene.

The oldest preserved szopka, made by Michał Ezenekier in the 19th century, is on display at the Ethnographic Museum in Kraków.

The tradition is unique to the city of Krakow and is considered part of the world’s collective intangible heritage by UNESCO. The choice to include Krakow Nativity scene was motivated not only by the fact that it is a centuries-old tradition but also because of its unique take on Nativity scene making.

“Krakow Szopkas highlight the diversity of Nativity scene making and Christmas traditions in general and manifest creative ways of depicting religious symbols intertwined with the surrounding reality,” UNESCO wrote on its website.