The Lateran Palace, historic home of the popes next to the Roman Basilica of St. John, closed since 2011, will now be open to tourists at the request of Pope Francis.

The Lateran Palace, historic home of the popes next to the Roman Basilica of St. John, closed since 2011, will reopen its doors to the public on December 13. It will host a new tourist route, requested by Pope Francis, with access for the first time to the former papal apartments of the “house of the Bishop of Rome.”

The new complex is now nearly 3,000 square meters. I.MEDIA was able to visit these places borrowed from history, art and faith in preview.

To visit the papal apartments of the Lateran is to open one of the few existing windows on the private life of the pontiffs of yesteryear. The basilica of St. John Lateran was a place of rest, life and prayer occupied for nearly 10 centuries by the successors of Peter. Until now, this space had never been open to the public. 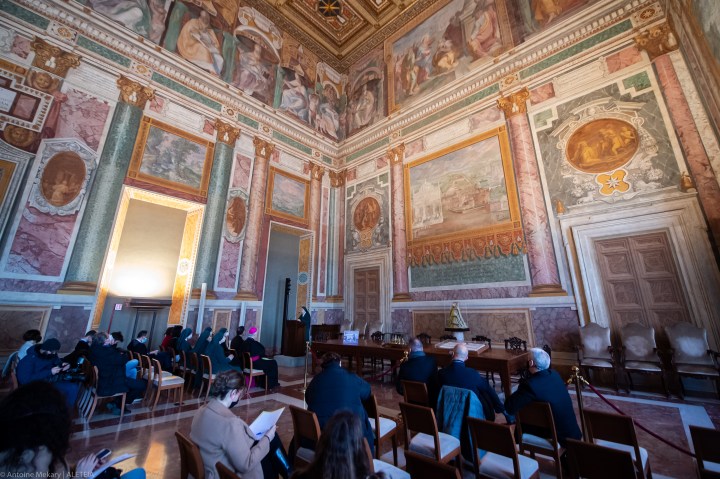 The apartments are made up of four rooms: a dining room, a bedroom, a library and a chapel. The little furniture found there is that which was used by Pope Paul VI during his last visits, the last pope to have decorated this place. Only his bed is missing for the time being, we learn.

The simplicity of the furnishings displayed follows modern Church protocol for papal apartments to display “understated elegance.” It’s a reminder that the pope is only a priest at the service of God and of the Church.

In the few paintings displayed on the walls, we recognize the silhouettes of the former occupants of the premises: Paul VI, John Paul II and John XXIII. The latter was probably the most attached to the place, since he had expressed the wish to be buried in his private chapel out of attachment to his diocese. In the end, he found his final resting place in the papal necropolis of St. Peter’s Basilica.

The sober austerity of the papal apartment contrasts with the richness of the 10 other rooms accessible in the Palace. Adorned with fine tapestries and vivid paintings, topped with frescoed ceilings, they tell of the centuries of the popes’ presence in these places.

The room where the famous Agreements were signed

The most important room, from the point of view of the history of the Church, is undoubtedly the Hall of the Pontiffs. On the upper part of the walls, 19 popes are represented, starting with the first of them, St. Peter.

But this room is more commonly called today the “room of the Lateran Agreements.” In fact, it was there that the agreements of the same name were signed in 1929 by the President of the Council Benito Mussolini and the Cardinal Secretary of State Pietro Gasparri.

The other rooms tell of other times in the history of the Church: that of the Emperors, when the latter came to Rome to be crowned by the pontiffs; that of Constantine, the first to have embraced the Christian faith, abandoning that of the pagan gods.

Further on is the room of David, then those of Solomon, Elijah, Samuel, Daniel, recounting the lives of ancient kings and prophets of the Old Testament. And after them the Hall of the Apostles. Finally, the Hall of Glory or the Seasons.

According to Bishop Pierangelo Pedretti, provost of the palace and prelate secretary general of the vicariate of Rome, it is “an experience not only of cultural visit, but also of pastoral evangelization” that these newly restored places offer.

A repurposing requested by Pope Francis

It was Pope Francis who requested this repurposing of the Lateran Palace in a letter of February 2021 addressed to his Cardinal Vicar General, Angelo de Donatis. The Bishop of Rome recognized in them the work of the Church to “promote the fruit of the genius and the know-how of artists, often testimony of experiences of faith and instruments to pay homage to God” and wished that these spaces play a similar role.

The Argentine pope asked Cardinal De Donatis to carry out in the Lateran Palace “exhibitions and cultural activities in various forms and with various contents” while “building on the noble artistic traditions of which the Church is proud.”

The papal rooms and apartments will be open to the public on December 13, 2021. Visits there will be led by Missionaries of Divine Revelation.