It's boring to be self-centered, says Pope Francis! Better to listen to others!

Pope Francis on December 19 enjoyed a festive morning in Paul VI Hall with a group of children, their parents, and caregivers who receive assistance and care from the Santa Marta Paediatric Dispensary. Pope Francis told them it is important “to listen to the needs of people,” asking the kids to repeat this invitation in chorus.

Responding to a child who expressed the importance of loving each other, the Pope said this is a good way to summarize the Gospel message, and he emphasized the need for closeness, explaining, “If we don’t look people in the eye, we will never understand their needs.”

“A person who doesn’t listen to others only listens to oneself,” the Pope continued, noting that it is boring to be so self-centered: “Better to listen to others,” he continued inviting the children to shout this out loud.

They then performed for him a short play and several songs. Pope Francis then greeted them, their families and dispensary volunteers.

Friends who want to help one another

The Pope spent time answering questions and inviting the children to always take notice of those who are in need, even though sometimes it is not easy.

“We are here today, friends who want to help each other. Have courage, go ahead and have a good party,” he concluded amid applause and choruses of good wishes.

The Santa Marta Paediatric Dispensary was born amid the hardships that followed the end of World War I.  It was started on May 8, 1922, by Pope Pius XI, who entrusted it to the sisters of the Daughters of Charity of San Vincent de Paul to take charge of feeding the poor children and the children of the war.

In July 2008, Pope Benedict XVI made it a foundation, with its own statutes. Currently, Cardinal Konrad Krajewski, the Papal Almoner who heads the Office of Papal Charities, is the foundation’s president.

Today, the doctors of Rome’s Bambino Gesù Hospital, the Saints Peter and Paul Association, private and other hospitals of the city charity, together with lay volunteers offer free service to the Dispensary, which marks its centenary in 2022.

Read more:Pope Francis to children: What to ask Baby Jesus for this Christmas 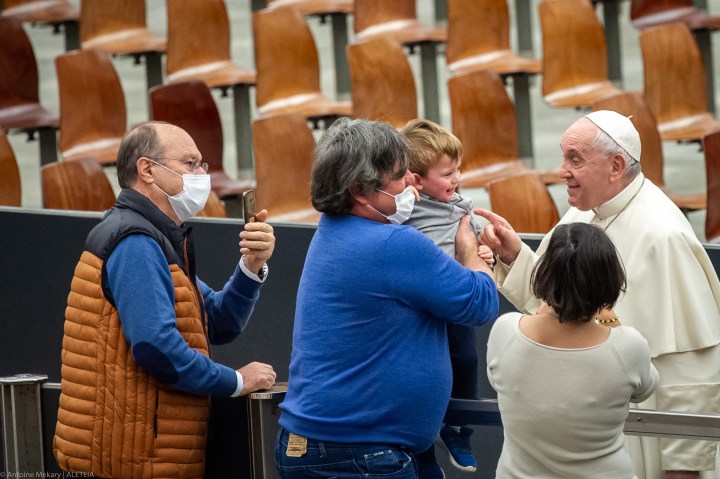