On the eastern bank of the River Jordan, just nine kilometers north of the Dead Sea, one finds the original location of the baptism of Jesus.

Al-Maghtas (meaning “immersion” and, by extension, “baptism” in Arabic) is the name given to the place that has been considered, since Byzantine times, to be the original location of the baptism of Jesus. It is also the area in which John the Baptist lived and ministered, and where tradition claims the Prophet Elijah was assumed into Heaven. Al-Maghtas, also known as Bethany-Beyond-the-Jordan, is clearly thick with layers and layers of thousands-year-long biblical references, traditions, and history. It is, thus, a holy place for all Abrahamic religions —and for Christians in particular.

Situated on the eastern bank of the River Jordan, just nine kilometers north of the Dead Sea, the site consists of two great areas. One of them is Jabar Mar-Elias, “Elijah’s Hill.” This is the place from which tradition claims Elijah was taken up into heaven in the 9th century BC. Scriptures say Elijah would return before the coming of the messiah, so when John the Baptist began baptizing people in the area, villagers came to inquire whether or not he himself was the messiah. One of the many caves in the vicinity of the baptism site is said to be the one John himself lived in. A monastery was built around it in the 5th century the first monastery on the eastern bank of the river.

The other area, in which we find the church of St. John the Baptist closer to the river, is the baptism site itself. This is the place where archaeologists found the ruins of a major Byzantine church and monastery, built during the reign of Emperor Anastasius (491-518). According to historical sources, the church was once considered the most notable memorial church of St. John the Baptist on this side of the river. Testimonies include that of Theodosius the Cenobiarch (an early monk, abbot, and saint), who wrote:

Although the pillar marking this place has not yet been discovered, the archaeological and architectural remains match Theodosius’ description.

The baptism of Jesus is one of those motifs repeated over and over again in Christian art. One can hardly find a great master who has not worked on it, all of them trying to reproduce most of the elements found in the biblical scene: as John baptizes Jesus in the Jordan, the skies open and the Spirit, shaped as a dove, hovers over the waters, in a distinctive reference to both the Creation and the Flood. The baptismal waters of the river symbolize both chaos and a new cosmos, the death of sin and the rebirth into a new life. Here, in Al-Maghtas, all this biblical imagery comes alive. But how do we know this was actually the place?

Tradition, and the famous Madaba map, have the answer.

Half an hour south of Jordan’s capital city, Amman, one arrives at Madaba. The city is home to the biggest Christian community in all the country, proportionally speaking: both Catholics and Greek Orthodox make up around 10% of its total population. The city once stood on the very borders of the Moabite empire, but during Roman (and consequently, Byzantine) rule, it belonged to the broader Arabian Province, founded by Trajan to substitute the Nabatean Kingdom. It was during those centuries, from the 2nd to the 7th, when the Christian community established itself. In fact, one already finds “Medaba” mentioned as an episcopal see as early as in the acts of the Council of Chalcedon, in the 5th century.

The Greek Orthodox church of St. George in Madaba, Jordan, is home to some of the most beautiful icons in the region. But it is also the place where the famous Madaba Map, a floor mosaic dated in the 6th century, is found. It is the oldest cartographic depiction of the Holy Land preserved to this day. It covers most of the region, from Lebanon to the Nile delta, from North to South, and from the Mediterranean Sea to the Eastern Desert, from West to East. In it, more than 150 towns, villages, cities and places of interest are featured, including some intriguing symbols. One of those symbols represents, scholars have discovered, the baptism site.

Make sure to visit the slideshow to discover 10 ancient pilgrimage places you can visit in Jordan. 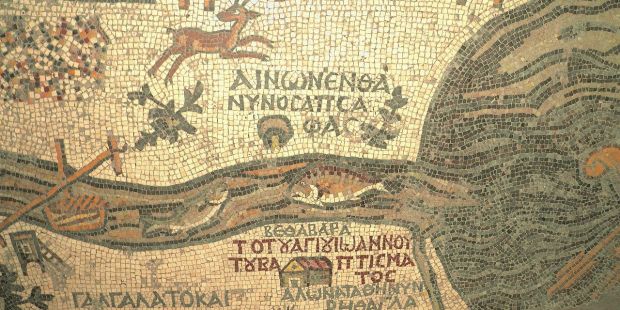