Putting Christ back in the French landscape

Driven by faith and love of their heritage, teams of young people are using their talents to restore the ancient crosses that dot the French countryside.

Young adults in France have embarked on a new project that involves resurrecting a Christian tradition that dates back centuries.

Teams of young people, both Catholic and non-Catholic alike, are devoting their time and energy to restoring hundreds of ancient dilapidated crosses and crucifixes that once stood as symbols of the country’s steadfast faith.

SOS Calvaires started as a small venture in Southwest France, and now has spread throughout the country. With more than 800 members in around 25 local groups, these volunteers work hard to restore the beauty in the French countryside.

In ancient times crosses and crucifixes marked the entrances to villages. They were erected centuries ago at crossroads, in country areas as way markers, and to indicate the presence of sacred places. Over the years, these crosses have become run down, damaged through pollution, and even vandalized.

Julien Le Page got involved in restoring wayside crosses in 2020 at the start of the Covid epidemic.

“I was too old to be a scout, but I was looking for a way to testify my faith. My brother-in-law, a carpenter, invited me to witness the installation of a cross in my commune, a small-scale venture restoring local crosses,” Le Page explained to Aleteia.

“It was a gloomy Saturday morning, raining hard, but when I saw the effect of the spectators stopping to watch these five young people carrying the cross, installing it and kneeling in prayer, I was totally in awe.

View the slideshow below for photos of the SOS Calvaires in action! 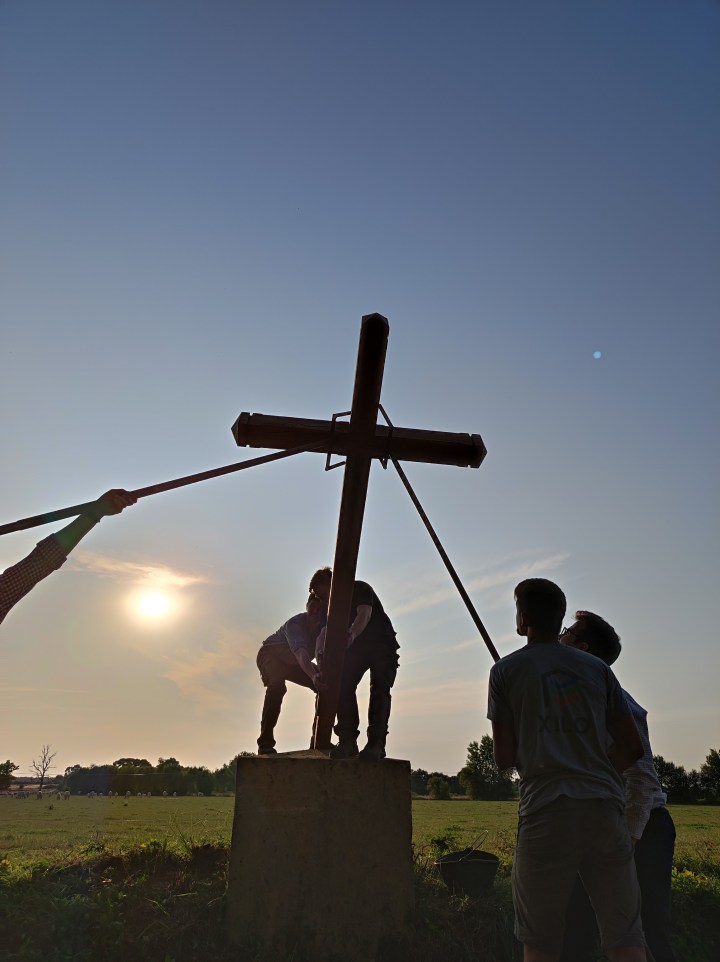 “It had a profound impact on me. I realized at that moment that this was an idea I  could develop nationally,  something I wanted to get involved in,” he said.

Le Page set a new challenge for the local group—all under 35 years old. Instead of restoring one or two crosses per year, why not restore one cross per month?

The association soon attracted more young recruits, driven by faith and love of their heritage. The local media became interested, anxious to cover the success stories of these carpenters, masons, and other artisans.

“SOS Calvaires became a recognized national association within a short time. And with that, offers of donations started to flood in,” said Le Page.

A professional accountant, Le Page is now President of SOS Calvaires in charge of development the association throughout France.

The association relies entirely on donations and income from the private sales of crosses and crucifixes.

Le Page said that landowners wanting to bless their properties order crosses just as they did in ancient times.

Finding ancient crosses dotted all over France is not always an easy task, but the SOS Calvaries have developed a solution that works. Le Page explained:

“Local people and hikers often find themselves in front of a derelict cross. We invite them to photograph their findings and use our web application [app] to connect with SOS Calvaries. Doing this  allows us to locate the cross, estimate the damage  and add it to our database,” he said.

Le Page said the association already have restored 2,400 crosses just from the app.

Carpenters prefer to work with three types of wood — oak, chestnut, and acacia. Once cut from the tree, the wood is dried thoroughly before any woodworking can take place. After assembling the two parts of the cross, the stipe (the vertical part,) and the patibulum (the horizontal part) the cross is then handed to the painter. His job is to ensure the wood is protected from adverse weather conditions.

With the crucifix attached, the cross is ready to be transported to the site.

Teamwork is vital onsite. The foundation needs to be laid, the cross hoisted, planted, and secured to the ground. The ancient wayside cross will have an SOS Calvaires plaque attached showing the year it was restored.

Benediction always follows the cross’s laying either on the side of the road or on private grounds.

After the hard work, the volunteers spend a quiet moment, a time of prayer, reflection, and gratitude very often in the presence of the local parish priest. It’s also a time of celebration for the volunteers, a time to enjoy the bond they share, a special sense camaraderie and community togetherness.

The future of SOS Calvaires

French laws state that no new crosses or crucifixes can be installed on public roads, but the association aims to restore 100 crosses in 2022. It’s a colossal challenge relying both on spiritual and material support. According to Le Page 100,000 crosses exist in France—made of wood, iron and stone. And with 70 percent  of them in serious need of repair, there’s much to be done.

SOS Calvaries is truly a success story, a national adventure uniting young people, Catholics and non-Catholics,  aiming to nurture and cultivate their faith and heritage with devotion, enthusiasm, and joy.

Special thanks to Julien Le Page for his time and photos of SOS Calvaires.