After its pandemic pause, the world’s oldest and largest returns in style.

Before the United States of America was even a nation, the Saint Patrick’s Day parade marched through the cobblestone streets of New York City. And together, the parade and the city grew to become the greatest in the world.

Heralded as the “oldest and largest St. Patrick’s Day parade in the world,” people are drawn from all around to celebrate the feast day that honors the legacy of Ireland’s patron Saint and everything Irish.

And after two years of pandemic restrictions that hampered the march from fully taking place, the parade returned in all its glory. 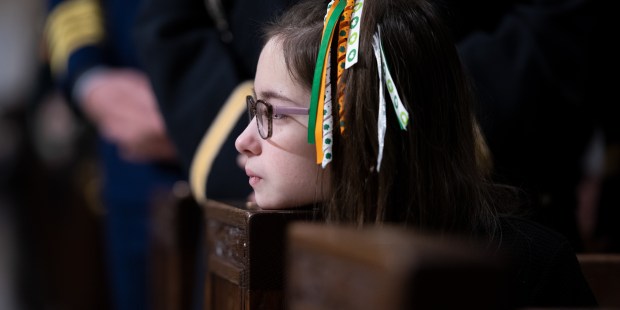 And despite the threat of rain, over 150,000 marchers and millions of green-clad parade-goers gathered in the spirit of joy that’s always defined the day.

In his homily, Bishop Brennan of the Diocese of Brooklyn spoke passionately about the importance of the day for the mission of the Church. “Parades, processions, really are a literal expression of what you and I should be doing, and are doing, every single day. Bring our Faith to the streets, to the community,” he said.

He continued, “We hold up St. Patrick, we carry the cross of Christ, in a celebratory way, with bagpipes, fifes, and drums. And part what is supposed to be today is about proclaiming Jesus Christ joyfully and effectively…sharing the good news and freedom that is found in Christ and living His Gospel and seeing the dignity of every person.”

He concluded with a call to arms for Catholics saying, “We bring the Gospel into a world who so desperately needs to know Jesus. Know how much the world needs you. The world needs you because it needs Christ. And you, faithful, joyful, witnesses of Christ.”

At the conclusion of the Mass, the congregation donned their raincoats and spilled onto the glistening city streets to greet the marchers.

A Moment of Silence

While the day’s celebration was much like celebrations from years gone by, this year, the year marking the 20th anniversary of September 11th, brought a very special meaning to the parade.

And as the parade approached the noonday hour, it paused and stood silent as the bells around the city rang out.

And in a moment of breathtaking solidarity, the entire parade turned to face southward towards Ground Zero.

Bishop Edmund Whalen then offered a prayer from the steps of St. Patrick’s Cathedral.

The sound of taps followed by “Amazing Grace” pierced the silence echoing off the concrete canyon walls. A memorial to those whose lives were lost. And a reminder of how precious freedom is and what it costs.

For all of its challenges, New York City is a city whose faith is inseparably woven into its history. So many of its rich traditions and celebrations trace their roots to the immigrants who suffered torturous travel by land and sea to worship freely in the land of the free and the home of the brave.

And New York’s St. Patrick’s Day is a shining example of this.