The Holy Father's knee is slowly on the mend, a meeting with Kirill is in the works, a visit to Ukraine is on the table...and more.

In the plane that brought him back from his trip to Malta, Pope Francis answered for 16 minutes to the questions of the journalists who accompanied him for this 36th apostolic trip, on April 3, 2022. I.MEDIA, present on board the flight, reports the entirety of the 85-year-old pontiff’s remarks.

On his health and knee problems

My health is a bit capricious, because I have this problem with my knee that brings out problems of mobility, to walk. It’s a little tiring but it’s getting better, but it’s a slow thing. We’ll see if it goes back… There’s a doubt, at this age; you don’t know how the game will end. Let’s hope it goes well!

On his trip to Malta

On Malta, I was happy with the visit, I saw the realities of Malta, an impressive enthusiasm of the people, whether in Gozo, in Malta, in Valletta and the others… A great enthusiasm on the roads in the streets. This impressed me.

On the issue of migrants

The problem that I saw, for you it is also one of the problems, is migration. The problem of migrants is serious, because whether in Cyprus, Greece, Spain, Italy, Malta, these are the countries closest to Africa and the Middle East, and they land here, they arrive here.

Migrants should always be welcomed, always. The problem is that each government has to say how much it can receive to live normally. And for this, an agreement is needed with all the countries of Europe, which are not all willing to receive migrants. Let’s not forget that Europe was made by migrants. That’s the way things are.

But at least we should not leave all the weight to all those neighboring countries that are so generous. And Malta is one of them. Today I went to the reception center for migrants, and the things I heard there are terrible. The suffering of those to get here.

And then there are lagers, these are lagers, which are on the Libyan coast, where they are sent back. This seems criminal. I believe that this is a problem that touches everyone’s heart. What Europe is doing with so much generosity to the Ukrainians who are knocking at the door, let it also do it to those who come from the Mediterranean.

I ended the visit with this and it touched me a lot. I heard the testimonies and the sufferings, which are more or less those of the little book I told you about, “Hermanito” in Spanish, little brother, with all the Stations of the Cross of these people. One of those who spoke today had to pay four times. I ask you to think about this.

About a possible trip to Kiev or Poland and about the bodies found mutilated after the passage of the Russian army in Ukraine.

Thank you for giving me this news today that I was not aware of. War is always a cruelty. It is an inhuman thing. It goes against the human spirit. I don’t say Christian. Human. The spirit of Cain…

I am willing to do whatever can be done. The Holy See, especially the diplomatic part, Cardinal Parolin, Archbishop Gallagher, are doing everything, doing everything. It is not possible to publish everything they are doing, for reasons of confidentiality. But we are at the limit of the work.

Through the possibilities, there is the journey. There are two possible journeys. One, the President of Poland asked me to send Cardinal Krajewski, to visit the Ukrainians who have been welcomed in Poland. He has already gone twice to bring two ambulances, and he stayed there with them. He will do it again, he is willing to do it.

The other trip someone asked me about… More than one person asked me if I had in mind to go. I said with sincerity that there is always availability. There is no “no”, I am available. And what about a trip, the request was this: we heard that you were thinking about a trip to Ukraine… I said it was on the table. It’s there, as one of the proposals that came in, but I don’t know if it can be done, if it will be for the best, if it’s appropriate, if I should do it.

All this is in the air. For a long time, we have been thinking about a meeting with Patriarch Kirill, we are working on it. We are thinking of doing it in the Middle East. These are the things as they are now.

About possible discussions with Vladimir Putin

What I have said to the authorities of all parties is public. I have not kept anything to myself that I have said. What I talked about with the patriarch, he made a nice statement about what we said to each other.

Then the Russian president, I had him (on the phone) at the end of the year, he called me to send me his greetings. We talked. Then the Ukrainian president, I also had him twice. And on the first day of the war, I thought I should go to the embassy to speak with the ambassador who is the representative of the people, to ask him questions and give him my impressions of the case. These are the official contacts I had.

With Russia I did it through the embassy. I also heard the major archbishop of Kiev, Mgr Shevchuk, and then I heard every two-three days, regularly, one of you, Elisabetta Piqué [an Argentine journalist currently in Ukraine], who is now in Odessa. I had her when she was in Lviv. I listen to her, she tells me how things are, I also spoke with the rector of the seminary there, with the messages of the seminarians, of the people there.

I am also in contact with one of your representatives. And speaking of that, I would like to express my condolences for your colleagues who have died. […] But your work is a work for the common good. And these people died in their work for the common good, for the information. Let us not forget them, they were brave, and I pray for them, that the Lord will give them their reward for their work. These are the contacts I have had so far.

What message would he give to Vladimir Putin?

The message I gave to all the authorities is what I do publicly. I don’t have a double language. It is always the same. I think that behind your question there was a doubt about the just war or the unjust war.

When the Second World War ended, everybody breathed and said: “No more war, peace”. And began a wave of work for peace, with the good will to make no more weapons, even atomic weapons at that time, after Hiroshima, Nagasaki. A great and good will.

There have been great ones, Gandhi, and so many others that I mention at the end of Fratelli tutti, who have bet on the pattern of peace. But we are stubborn. We are stubborn as humanity, we are in love with wars, with the spirit of Cain. It is not by chance that this problem is at the beginning of the Bible. The “Cainist” spirit of killing, instead of the spirit of peace.

I tell you something personal: when I went in 2014 to Redipuglia, I saw the names, I cried, really I cried with bitterness. One or two years later, for the Day of the Dead I went to celebrate in Anzio, and I also saw the young people who died in the battle of Anzio. There were the names, all young people, and there too I cried – really, I didn’t understand. You have to cry over the graves.

Another thing: I respect because it is a political issue, but when there was the commemoration of the Normandy landing, the heads of government met to commemorate. But I don’t remember anyone talking about the 30,000 young soldiers who stayed on the beaches. We opened the boats, they went out and… [incomprehensible]. Youth does not count. It makes me think and it makes me suffer.

I am saddened by what is happening today, we are not learning. May the Lord have mercy on us, on all of us. We are all guilty. 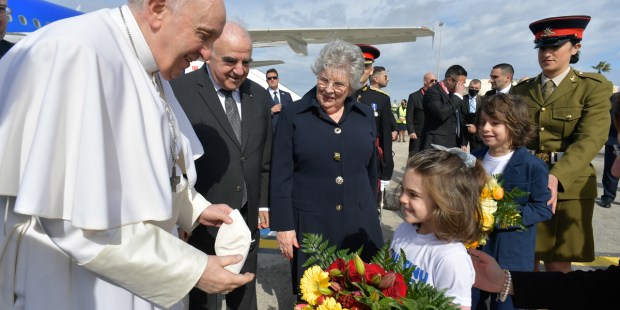