36 young men swear to defend the pope, with their lives if necessary.

Every year, May 6 is the day on which the new recruits of the Swiss Guard take their oath of office, in a ceremony that is always colorful. This year, on May 6, 2022, the event had extra soul, as the week was marked by a historic rapprochement between Switzerland and the Holy See, the two nations dear to the hearts of all members of the small Vatican army.

The weather was gloomy and finally rainy at the end of the afternoon in Rome: the ceremony was therefore relocated to Paul VI Hall.

In this less intimate and prestigious setting than the courtyard of Saint Damasus, parents, officials, and other invited personalities and groups did not fill a quarter of the room. But the orders shouted in German and French resounded spectacularly under the great modern vault that regularly hosts – especially in winter – the audiences of the Supreme Pontiff.

After the reading of the story of the glorious sacrifice of the Swiss Guards to save Pope Clement VII during the Sack of Rome, 495 years earlier, followed by the resounding warning of three trumpets, the Guards entered to the sound of the dry rolling of drums.

Gala uniforms, gleaming armor and spalieres, helmets with blood-colored plumes, weapons in hand, they formed a picket on the platform in front of the huge statue of the Resurrection.

Commander Christoph Graf presented them to the substitute Edgar Peña Parra, who represented Pope Francis during the ceremony.

The anthems of both countries were then played, several speeches were made and then came the expected moment. One by one, the halberdiers presented themselves with slow steps before the colorful flag of the Guard. Raising three fingers, their hands on the standard, they all swore, in their respective native languages, to defend Pope Francis and his eventual successor, to the death if necessary, asking God and his patron saints to assist him in his noble task.

This year there were 36 young men who took this step. Arriving eight months earlier, these young practicing Swiss Catholics, between the ages of 19 and 30, and at least 1.74 meters (5’8.5″) tall, as required by the rules, add to the ranks of the Pope’s army, which, at the request of Pope Francis, recently grew from 110 to 135 members in 2015. 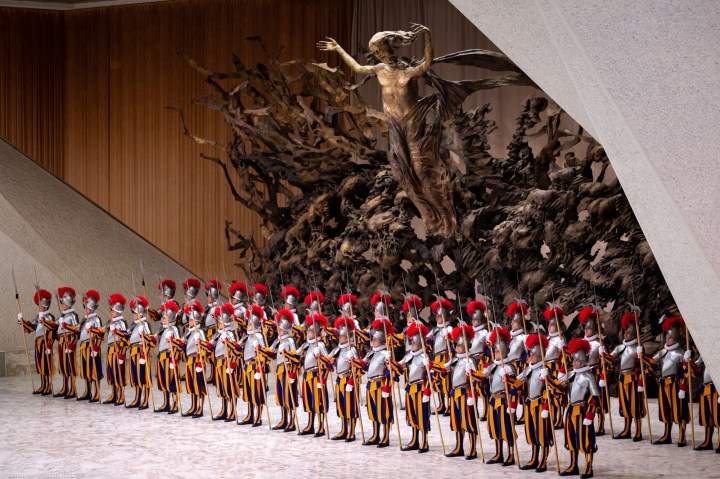