The Eucharistic miracle of Orvieto was instrumental in bringing the Church the feast of Corpus Christi. Their procession is something to behold! 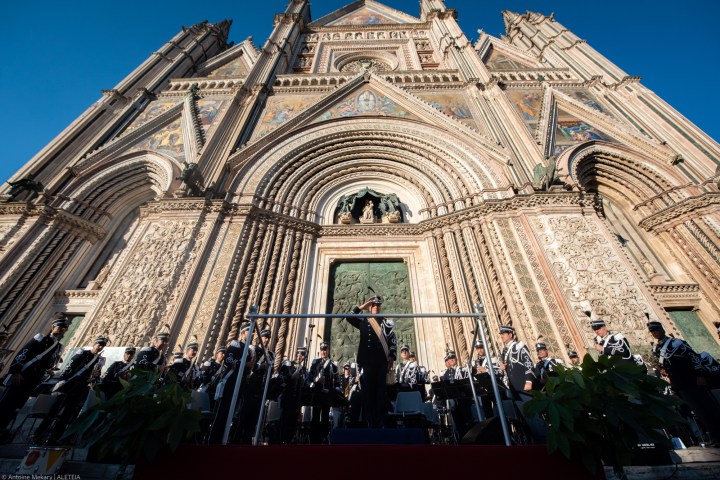 The Vatican Gendarmerie band took center stage at this year’s Corpus Christi celebrations in Orvieto, Italy. The band gave a concert on the evening of Sunday, June 19, the solemnity of Corpus Christi.

The event – titled “A Window on Peace” – was sponsored, as it is every year, by the Equestrian Order of the Holy Sepulcher of Jerusalem.

Orvieto is the place where the Eucharistic miracle at the origin of the solemnity of Corpus Christi took place. According to tradition, around the year 1263, a German priest who had some doubts about the Real Presence of Christ in the Eucharist, was celebrating Mass at the tomb of St. Christina in Bolsena.

At the moment of the consecration, drops of blood fell from the Host, staining the altar and liturgical linens. Pope Urban IV, who was in Orvieto, had the precious relic brought there. On September 8, 1264, Urban IV, with the “Transiturus Bull,” extended the feast of “Corpus Christi” in Orvieto to the entire Catholic world.

History of the procession

In 1337 the Bishop of Orvieto had a reliquary made for the Sacred Corporal of the Miracle of Bolsena, where in eight scenes the story of the Miracle is told. In 1338 the Reliquary was for the first time carried in procession on the day of Corpus Christi. This is the first official procession of which there is any record.

Since then, every year on the feast of Corpus Christi, the Sacred Corporal, enclosed in the precious reliquary, has been carried in procession through the streets of the town.

It was not until 1951, however, that, based on the documented presence of 12 armed men, acting as escorts to the relic, it was decided to place the element of the religious procession in a historical setting that would re-enact the ancient civic and military glories of the medieval township. Figurers in period costume precede the religious procession through the village roads.

This year the pontifical Mass was presided over by Cardinal Mario Grech, secretary general of the Synod of Bishops. At the end, the historical procession — this year 430 figures in period costume, 44 drums and 100 flags — entered the cathedral through the side door and poured in, preceding the religious procession that carried the Blessed Sacrament and the corporal of the miracle through the streets of the village.

For the past 13 years, the Equestrian Order of the Holy Sepulcher of Jerusalem has promoted a concert to close the Corpus Christi celebrations, inviting various national bands of the Armed Forces and Police.

Before Covid, the NATO band arrived in Orvieto. This year, it hosted the band of the Vatican Gendarmerie Corps.

The band of the Vatican Gendarmerie was established in 2007. It is currently conducted by Maestro Giuseppe Cimini and deputy Stefano Iannilli. It consists of about 100 elements, all volunteers, conservatory graduates and coming in many cases from Italian military bands.

The uniform is inspired by that of gendarmes in ordinary service. On the program are the pontifical anthems at the beginning and the Italian anthem at the end, some marches, opera pieces and some famous arias, from “Casta Diva” from Norma to the chorus from Nabucco to “Nessun dorma” from Turandot.