Aquileia, the ancient Roman city that was once a center of medieval Christianity

In the Middle Ages, the Church of Aquileia boasted the title of patriarchate, second in importance (in Italy) only to the Holy See of Rome.

Aquileia is a minor Italian municipality with just over 3,000 inhabitants. Located at the northernmost tip of the Adriatic Sea in the Italian region of Friuli-Venezia Giulia, it is a short distance from both Slovenia and Croatia. Though it is a quiet city today, in Roman times, it was one of the empire’s largest and most prominent cities.

Aquileia was founded as a Roman colony in 181 BC. By the 2nd century, it boasted a population of over 100,000 people. It was an important center for commerce as it was located in a strategic position between the Mediterranean Sea and Central Europe. Due to the city’s wealth and status, magnificent public buildings and private residences alike were built.

In late antiquity, the city’s decline began. It was brutally sacked by the Huns led by Attila in 452. It rose again, but never had the same economic or political prominence.

The Church of Aquileia, however, remained prominent for many centuries. It played an important role in ecclesial affairs and hosted a number of councils. In the Middle Ages, the Church of Aquileia boasted the title of patriarchate, second in importance (in Italy) only to the Holy See of Rome. Not even the Church of Ravenna – which was an Exarchate, or seat of the Byzantine governor of Italy – boasted such a high rank. The Church of Aquileia even had its own liturgical rite, known as the Aquileian Rite, which was used as far as Venice and survived into the 17th century.

By the 18th century, the Church of Aquileia lost its status as a see. Today, it has been reduced to a parish church! In a nod to its former grandeur, however, a titular see in Aquileia remains, and the ordinary (the rector) has the canonical right to use episcopal insignia on seven occasions throughout the year. 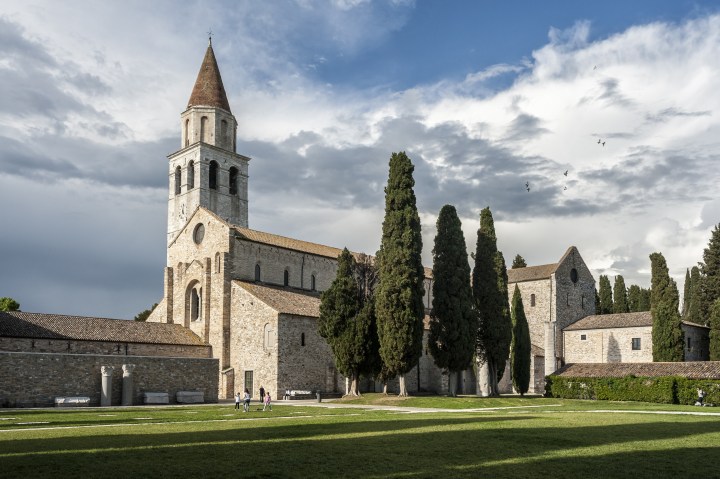 Of the ancient city of Aquileia, 155 hectares (383 acres) has been excavated. This makes Aquileia the most important archaeological site in all of northern Italy. That said, most of ancient Aquileia still lies beneath the fields and has yet to be unearthed.

The most predominant edifice of Aquileia is the patriarchal basilica of Santa Maria Assunta. Overlooking the Piazza del Capitolo, together with the baptistery and the bell tower, the basilica complex is remarkable and imposing. Dating to the Paleo-Christian era, it served as the ancient cathedral church for the patriarchate of Aquileia. It was built in the 4th century, rebuilt in the 11th century in Romanesque style, and redone once again in the 13th century in the Gothic style.

The façade, in Romanesque-Gothic style, is connected by a portico to two structures facing it: the “Church of the Pagans” (so-called because the catechumens gathered there before baptism) and the remains of a 5th-century baptistery. The interior consists of a nave separated from two side aisles by a series of Corinthian columns and arches, an early 16th-century wooden ceiling, and frescoes inside the apse from the 11th century.

The most impressive feature of the basilica is the striking floor mosaic. Dating to the beginning of the 4th century, the mosaic encompasses more than 760 square meters (8180 ft²) making it the oldest and largest Christian mosaic in the entire West.

Below the presbytery is a crypt. The entire crypt, including the columns, is magnificently frescoed with stories from the life of Jesus and Mary (side walls and lunettes), figures of saints (gulfs of the vaults). and with those of the Life of St. Mark and St. Ermacora (vaults).

The remains of St. Hermagoras, the first bishop and patron of the city, are conserved beneath the main altar. According to a local tradition, he was chosen by St. Mark to lead the young Christian community in Aquileia, and was ordained a bishop by St. Peter. Hermagoras and his deacon Fortunatus evangelized the area, but were eventually arrested by representatives of Emperor Nero for Christian proselytism. They were tortured and beheaded. (Some historians believe, however, that Hermagoras lived in the 3rd century.)

Other points of interest

Elsewhere in Aquileia, it is worth a visit to the National Paleochristian Museum and the National Archaeological Museum.

In 1998, the patriarchal complex of the basilica and the whole extension of the Roman city of Aquileia was inscribed as a UNESCO World Heritage Site.