When the statue of Saint Peter is dressed as the Pope

Every 29th of June, for the Feast of Saints Peter and Paul, the famed bronze sculpture of Saint Peter, in Saint Peter’s Basilica, is dressed in traditional papal attire, including a triple tiara, the fisherman’s ring, and either a purple or red mantle over its shoulders.

Since at least the year 1300, the statue has welcomed the pilgrims who travel to Rome to venerate the relics of the first pope. For more than seven hundred years, visitors would kiss the statue’s right foot. This explains why its toes are worn down­–and why pilgrims can now only pray before it from a distance. Maybe the distance also intends to keep the statue from going through an episode similar to that of March 12, 2003, when the left hand of the statue (the one holding the keys) mysteriously disappeared. The work was immediately restored.

Tradition claims this is one of the very few late-medieval bronze statues preserved to this day. It has been widely attributed to the Florentine architect and sculptor Arnolfo di Cambio, who would have finished it at the end of the 13th century. However, since sculptors began signing their works relatively late during the Renaissance, some historians speculate this sculpture is an ancient Roman statue of Jupiter, slightly altered to make it look like the Apostle.

Another theory claims Pope Saint Leo the Great commissioned a statue of Saint Peter, made with the cast bronze of an ancient Jupiter statue, to thank the Apostle for saving Rome from Attila the Hun.

Make sure to visit the slideshow below for a virtual tour of Saint Peter’s Basilica. 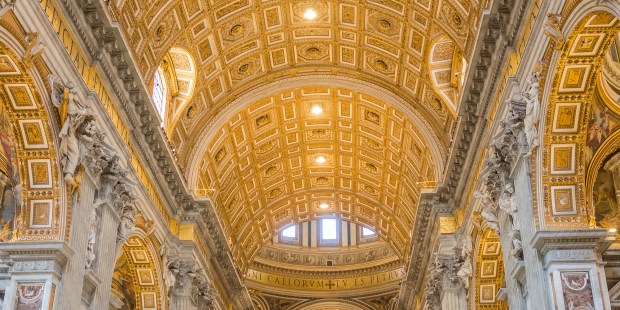