Six years after the murder of a French priest, his rectory is preserved

July 26, 2022, marks the sixth anniversary of the murder of Father Jacques Hamel in his church in Saint-Étienne-du-Rouvray. Aleteia visited his rectory, where time has been suspended since that terrible day.

Immutable and implacable, time continues to run its course. Days become weeks, weeks become months and months become years. But some days, like that of July 26, 2016, remain engraved on our hearts. Today, July 26, 2022, marks six years since Father Jacques Hamel’s throat was slit while he was celebrating Holy Mass in his church in Saint-Étienne-du-Rouvray.

The court trial to prosecute the perpetrator of the attack was held in February and March 2022 before the Court of Assize of Paris. The court convicted four men accused of terrorist conspiracy following Father Hamel’s murder.

The cause for the beatification of Father Hamel has been opened. The community of Saint-Etienne-du-Rouvray is launching a new subscription to expand and renovate the space to welcome the ever-increasing number of pilgrims. Time seems to be suspended on July 26, 2016, in the rectory of Father Jacques Hamel. 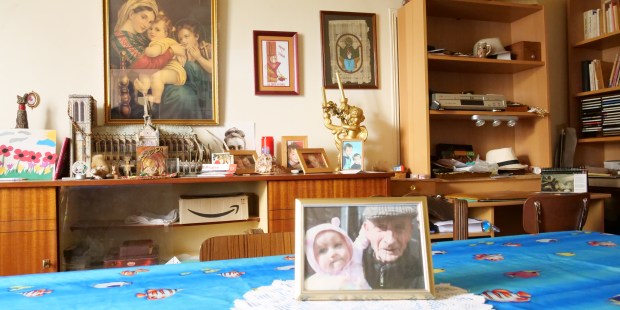 The day before Father Hamel’s murder, July 25, 2016, Roseline Hamel arrived with six other family members at her brother’s rectory for a visit. “He was waiting for us with bated breath and we arrived a little late,” she recalled during her hearing before the assize court on February 17, 2022. That evening they took a final meal all together. “He set his place at the table and told us: ‘I am so happy to have you at my table!'”

The next morning, Father Jacques Hamel got up before them to celebrate, as usual, the weekday Mass at 9:00 a.m. in the church of Saint-Etienne. The assembly was slightly more sparse than normal, owing no doubt to summer travels of parishioners.

“As usual, we thought we would have coffee with him when he returned from Mass,” Roseline Hamel confided, with a sob in her voice. “He had prepared breakfast, the bowls were on the table, the bread was out …” Less than an hour later, Father Jacques Hamel was murdered in his church. While the murder of Father Hamel shook the whole of France and had repercussions throughout the world, it is indeed a form of peace and simplicity that inhabits his rectory. Just like the man he was.