The definitive film on Mother Teresa will hit select U.S. theaters on October 3 and 4.

As the Catholic Church marks 25 years since the death of St. Teresa of Calcutta, or Mother Teresa, the Knights of Columbus are honoring the foundress of the Missionaries of Charity with a new documentary. The film, Mother Teresa: No Greater Love, premiered this week at the Vatican’s prestigious Filmoteca Vaticana, but it’s coming to select theaters across the U.S. on Monday, October 3, and Tuesday, October 4.

The documentary comes as a joint effort between the Knights of Columbus and the Mother Teresa Center, and is a part of Fathom Events’ Saint Series. According to a press release, it was filmed on five continents and features historical photos, videos, and audio recordings of Mother Teresa. The film is further bolstered with testimonials from historians and people who knew Mother Teresa personally.

Filmmakers note that they were given unprecedented access to institutional archives and the apostolates of the Missionaries of Charity. These resources allowed them to examine the life of this “spiritual giant of the 20th century,” closer than ever before.

Prior to the film’s premier at the Vatican, Supreme Knight Patrick Kelly had the opportunity to present a copy of the film to the Holy Father at his general audience. Kelly said of the occasion:

“I was very happy to present a copy of the documentary to Pope Francis, who received it with much enthusiasm,” said Supreme Knight Kelly. “When Mother Teresa was feeding the hungry or holding the hands of someone as they lay dying, she was treating them as she would the most important person in her life, Jesus Christ himself. Our hope is that Mother Teresa: No Greater Love will inspire a new generation to carry on her mission.”

Pope Francis later thanked Kelly in a letter to the Supreme Knight. The pope wrote:

“Thank you for all the efforts made to capture the life of this saint whose life and testimony have borne much fruit.”

The Holy Father added that he hoped “… the documentary will do much good to all those who watch it and arouse the desire for holiness.”

At the Pontifical North American College (PAC), a preview of Mother Teresa: No Greater Love was followed by a panel organized by the Knights of Columbus to discuss the making of the film. Participants included Supreme Knight Kelly; Father Brian Kolodiejchuk, postulator of Mother Teresa’s canonization cause; actor Jonathan Roumie, star of The Chosen; and Emmy Award-winning filmmaker David Naglieri, who wrote, directed and produced the documentary. See images in the slideshow below.

Paul Haring via Knight Of Columbus

According to Vatican News, Jonathan Roumie called the film “really fascinating” and “moving,” as well as reiterating Supreme Knight Kelly’s hopes that the film can reach the younger generation. Roumie said:

“I think for young people to kind of experience her story and be moved by it and what she did with the Missionaries of Charity, I think it’s going to inspire many people to seek out the Order, and want to emulate the qualities that she possessed.”

Mother Teresa: No Greater Love will screen in 900 locations throughout the United States on October 3 and 4. Fans near Washington, D.C., will have a chance to see it early, however, as the Pope St. John Paul II National Shrine will hold a matinee screening at 2:30 p.m. Tickets for the event can be reserved at the Mother Teresa Institute’s website. 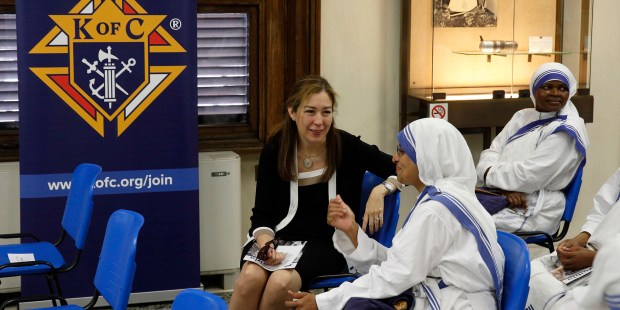