UNESCO is officially recognizing the spiritual, cultural, and educational contribution to humanity of Thérèse Martin, St. Thérèse of Lisieux.

The United Nations Educational, Scientific and Cultural Organization (UNESCO) is officially celebrating in the 2022-2023 biennium the 150th anniversary of the birth of one of the greatest saints of all time, St. Thérèse of Lisieux.

This decision, voted on November 11, 2021, by the General Conference of UNESCO member countries, seeks to recognize the spiritual, cultural, and educational contribution to humanity of Thérèse Martin (her given name). Born on January 2, 1873, she became a Carmelite nun, and died at the age of 24. She dedicated her life to God in the cloistered convent of Lisieux, in French Normandy.

A language of love that transcends borders

“Every two years, UNESCO pays tribute to personalities who, each in their own way, have worked and continue to work in the fields of education, the promotion of women, culture, science and the building of peace,” explains Fr. Thierry Hénault-Morel, rector of the Shrine of Alençon, the town where the saint was born.

“Thérèse, who is known throughout the world,” adds the priest, “contributes to the promotion of universal values with her works and her testimony. Through the quality and depth of her life, she speaks a language that transcends borders: that of Love.”

To the furthest “peripheries”

Fr. Olivier Ruffray, rector of the Shrine of Lisieux, where the Carmelite monastery of the saint was located, considers that “the recognition of Thérèse of Lisieux by UNESCO, at the proposal of France, opens new perspectives for the spread of her message of life, peace, and love to ‘the most remote islands,’ as Thérèse of Lisieux herself said, or the ‘peripheries,’ in the words of Pope Francis.”

John Paul II named Thérèse of Lisieux a Doctor of the Church on October 19, 1997, and dubbed her “doctor of the science of love.”

“Doctor of the science of love”

All four bear witness to the richness of contemplative life for the Church and the world: one was a Benedictine, another a Dominican, and the remaining two were Carmelites.

A science that transcends time and cultures

The rector of the Shrine of Lisieux emphasizes that the declaration of Thérèse as a Doctor of the Church means that “her doctrine, her teaching, and the path she traces are addressed to all of humanity.”

This teaching is summarized as the “science of love,” a science he says “transcends all times and all places and is found in all cultures.”

The “science of love,” which we can learn from St. Thérèse of the Child Jesus, “unites all men and women of this world because it corresponds to the search for the meaning of our world, to the search for what is deepest in human beings, which is to love.”

The “science of love,” which Thérèse understood and expressed, is based on the realization that love for God and others does not depend on a person’s great abilities, qualities, or merits:It is based, rather, on the ability to accept one’s own fragility and the love of God for each person.

Pope Francis, a great admirer of St. Thérèse, describes this “science” as requiring an act of trust: “Trust like that of a child who abandons himself into the hands of God.”

Fr. Olivier Ruffray, whose mission is to continue to radiate the message of Thérèse from Lisieux, believes that UNESCO’s proclamation allows her message to reach people of different cultures and religions.

“Even today, the spiritual closeness of Thérèse allows many people” throughout the world “to benefit from this same invitation to follow this path of inner freedom, which is simply the path of spiritual childhood discovered by Thérèse of Lisieux. She shares her experience of it with those of our contemporaries who receive her message and allow themselves to be touched.”

This “science of love” of Thérèse of Lisieux “helps those who try to live it, to experience personal interior peace. It builds the person and cultivates a spirit of peace,” concludes the rector of the shrine.

Visit the slideshow below to enjoy some rare photographs of St. Thérèse, taken by her sister Céline. 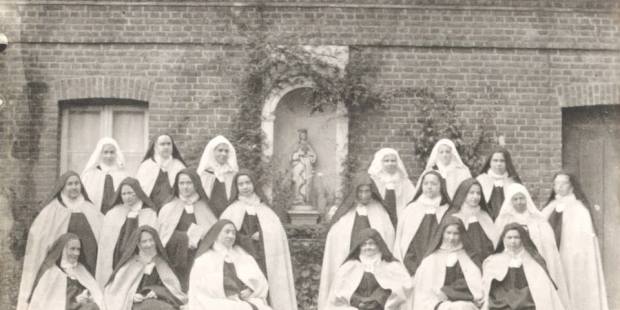