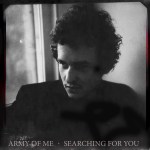 Name: Army of Me Hometown: Washington, DC Current City: Nashville, TN Latest Album: Searching for You Curiosity: Since Army Of Me's major label debut in 2007, the music has been on rotation on mainstream radio stations, with a video on MTV, and tour dates with artists like Coldplay, Dave Matthews, The Used, and Switchfoot, to name a few. The most recent album Searching For You was written after singer Vince Scheuerman lost his voice for 2 years, had surgery, and a comeback to singing. Website: http://armyofmeonline.com Facebook: http://www.facebook.com/armyofmemusic

When a Rising MTV Star Lost Everything