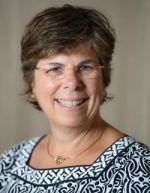 Susan M. Timoney received her Doctorate in Sacred Theology (STD) at the Pontifical University of Saint Thomas Aquinas (The Angelicum) in 1997. She focused on Christian spirituality and the feminine dimension of discipleship. Following her studies, Susan served as vice-president of a lay education and formation program called Education for Parish Service which hosted programs in five dioceses in the United States and in the Archdiocese of Rome, Italy. Susan was appointed Assistant Secretary for Pastoral Ministry and Social Concerns for the Archdiocese of Washington in 2010 and served as Assistant Secretary and Secretary until her appointment as Associate Professor in 2018.  Susan began teaching as a lecturer in 1998 in the undergraduate theology program and in 2016 was appointed an Adjunct Assistant Professor in the School of Theology and Religious Studies. Susan is a nationally and internationally recognized expert in the fields of evangelization and pastoral leadership serving on numerous board of directors including Catholic Charities of the Archdiocese of Washington,  The Catholic Apostolate Center, The Dominican House of Studies, Washington DC, The Lay Centre at Foyer Unitas, Rome and the Catholic Information Center.
Susan Timoney

Foundations for Discipleship: Skills for witness and accompaniment