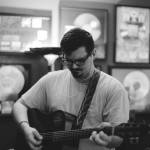 Name: Sylvester Band City: Fairhope, Alabama Latest Album: Down to the Jordan EP Curiosity: The band’s origins go back to a difficult time in frontman Stephen Sylvester’s life. He began writing songs after his wife's battle with leukemia (she is doing well now). He was then convinced to record the songs by some friends in the music industry. After a surprisingly successful Kickstarter campaign, they were able to record in a top-quality studio with professional sound engineers. Together with Stephen, the band is made up of Clay Tucker, Spencer Gayles, Mark Lawrence, and Bob Rubion. Website: www.sylvesterband.com
Sylvester Band

This song is an inspiration for all the “normal” Catholics