With “Godspell,” as with so many things, you never forget your first time. 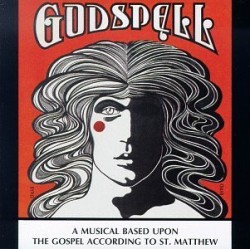 Mine was in the spring of 1973, on an 8th grade class trip that took us down to Ford’s Theater in Washington to see that “hippie musical about Jesus,” as one of the nuns in the school disdainfully called it (though to this day, I think she had it confused with “Jesus Christ, Superstar”).   Anyway, in 1973 all the kids at St. Peter’s School in Olney, Maryland knew the music.  “Day by Day” and “All Good Gifts” had become staples at guitar masses.  We were expecting a nice time (and a day off from school).  But nothing quite prepared me to be so captivated by Matthew’s gospel, told in clown face and wacky pantomime, with references to “Laugh In” and Richard Nixon thrown in.  I certainly wasn’t prepared to find myself so moved at the finale, as they carried the body of Jesus down the aisle of the tiny theater and then broke into a joyous dance.  “Long live God…Prepare ye the way of the Lord!”  When the cast came running back down the aisles for the curtain call, the whole theater was on its feet screaming and I found myself clapping until my hands hurt.

Just three years later, as a frizzy-haired high schooler, I was cast in a community theater production of “Godspell,” and this time, I was the one running down the aisle at the end to the thumping chords of “Day by Day,” and watching from the edge of a rickety wooden stage, looking out at the beaming faces of people who just got it – they got the gospel, the exuberance, the uplift, the joy.  I remembered what I had felt like back at Ford’s Theater a few years earlier.  It was a blast to give some of that back.

So this week, when I took my seat in the audience at the Circle in the Square for the Broadway revival of “Godspell,” I had to wonder:  would it be that good?  Would it give me that “Godspell“ glow I remembered from all those years back?

This “Godspell” has it: the energy, the wonder, the joy and – most magically — the sense of surprise.  Expect the unexpected.

So: expect the wooden stage to be transformed into a pool – the better for baptisms, of course, and to provide a place for Jesus to casually walk across the water.  Expect that same pool to become a fizzy, smoky, glowing table for the Last Supper.  Expect trap doors to pop open and for the stage to reveal, suddenly, trampolines.  Expect musicians to materialize in the audience with guitars, and for people sitting near the stage to be drafted, without any warning, as extras in the Greatest Story Ever Told As a Party Game.  (Advice: practice your “Pictionary” before you buy your tickets.)   Expect to encounter  Donald Trump and Oprah and jabs at “The Lion King” and even gags about Occupy Wall Street and Steve Jobs. 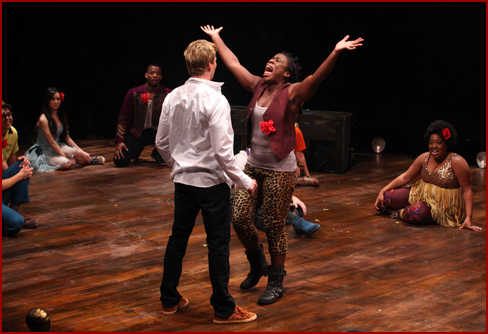 Expect a cast that is gifted in, well, everything – improvisation, impressions, gymnastics.  And singing.   Yes, of course, the singing!  These kids have amazing pipes.  Every rendition of every song made me turn to my wife and say, “I gotta get the album for this.”

And expect, too, to find the material – the parables, the lessons, the dramatic reenactment of the gospel – played with a sense of both mischief and mission.   It’s all done with a kind of irreverent reverence that is the hallmark of this show, and it justclicks.

Of course, for all its fun, “Godspell” won’t work if it doesn’t stir the heart, and this one does.  The actors connect with one another in a way that makes them believable disciples.  As a result, when Jesus is torn away from them, you feel it.  The crucifixion – with Jesus bound to a steel beam, paper flowers dangling from his wrists – is still unexpectedly moving. 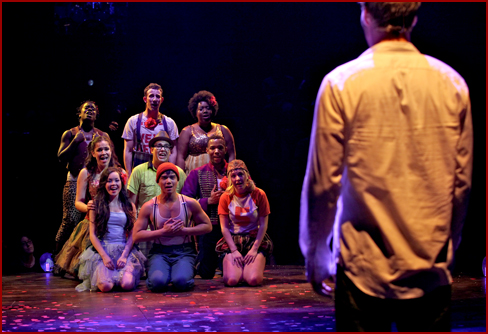 And if you have the kind of memories of “Godspell” that I have, you’ll also feel by the finale that you have witnessed something wondrous.  For a couple fleeting hours, this production stirs up, in its own impish way, 40-year-old memories of another age and another time that I thought were long buried.

This isn’t just a revival.  This is something better – and something “Godspell” needs to be.

It’s nothing less than a resurrection.

And I gotta tell you: I’m a believer.