A Death in the Family: Deacon Joe Marotta—UPDATED 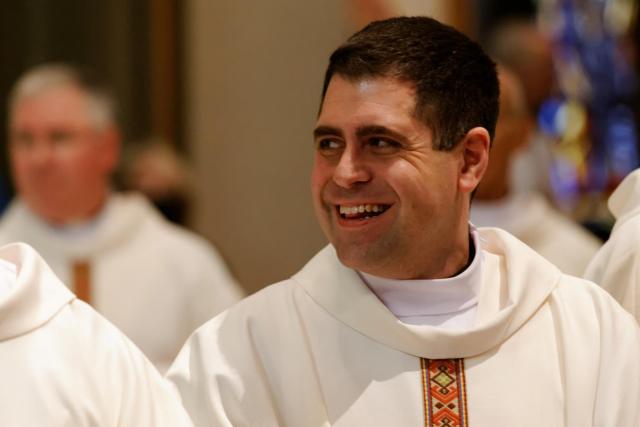 I’m numb. Deacon Joe Marotta, ordained just last fall for the Diocese of Richmond, is gone. He was 39.

Shock. Grief. We got word this afternoon that our Deacon and friend, Joe Marotta, drowned while on vacation with his family. It is a vivid and painful reminder that life is not fair. Joe leaves behind a tremendous and tenacious wife, Katie, and five young children. After years of study, prayer, and preparation, Joe was ordained as a Permanent Deacon last fall.  Pictured below, he is with Katie and their youngest son, William, as they started to process at the beginning of his ordination in October. 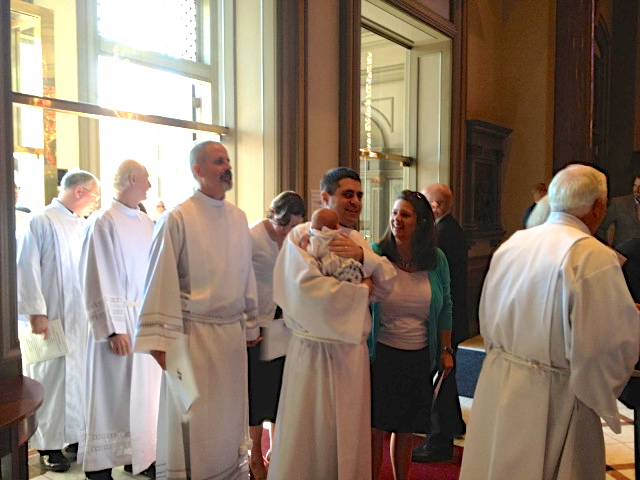 I pray for Katie and their children: Caroline, Christopher, Jack, Michael, and William.  Their loss is immeasurable. Personally, it is difficult to overstate the respect I have for him as a father, scholar, and spiritual leader. Of all the pastors, preachers, and deacons I have met in my limited time on this earth, no one brought the richness and depth of Christianity home to me like Joe.  It is not even close. That is not hyperbole. That is in my heart and in my soul. Joe was instrumental in introducing me to the history and tenets of the Catholic Church, leading me and several others through the Rite of Christian Initiation of Adults during the winter of 2006-07.  He welcomed me and the questions I brought in from outside of the Catholic community. I could talk with him about football in one moment, fatherhood in the next one, and the Letters of Paul in the one that followed. After his ordination, he began to give occasional homilies at Mass. And he was tasked with giving one on the Sunday following the school shooting in Connecticut, only two months after his ordination.  He successfully navigated the tones and emotions that followed the tragedy in his message that day, and it was clear to me that his hard work, dedication, and prayers prepared him to lead. He leaves a tremendous void in his family and in our church.

Joe was a regular and loyal reader of this blog, and long before he was ordained, he wrote to me for advice about work, family life, ministry, preaching. He also had a blog of his own, The Journeyman Carpenter. We became cyber-friends. Joe had a wonderful spirit and great sense of humor and, more than anything, loved and adored his growing family.  He never tired of talking about something one of his kids had done. His joy about his vocation as a deacon was palpable.  He invited me to his ordination in Richmond last fall and I wasn’t able to make it, but sent along my prayers and a little gift.  This spring, he was excited about chanting his first “Exsultet” at Easter, and embarrassed that he didn’t take time to learn the dismissal “Alleluia.”  But there would be other Easter Vigils, wouldn’t there?

He was one of the youngest deacons I’d ever known — and  he was overwhelmed at times by the conflicting demands of family and ministry (as are we all).  But his devotion was total.  I’ll never forget the video from his ordination, and seeing him process in, carrying his newborn baby in his arms.

A few days after his ordination, Joe wrote to tell me, with wonder and joy, about a quote from Cardinal Timothy Dolan on the priesthood:

Part of his talk really struck me. I replaced every reference to priest with the word deacon. This is what it looked like: —————————————————————– “Diaconate is not, first and foremost, something we do, but someone we are. “The diaconate is a call, not a career; a redefinition of self, not just a ministry; a way of life, not a job; a state of being, not a function; a permanent, lifelong commitment, not a temporary style of service; an identity, not a role. “If the very value of my diaconal vocation depends on what I do, where I’m assigned, how the people affirm me, how my bishop treats me, what the newspapers report about us, what horrible sins brother deacons may have committed, what negligence was shown by their bishops, how much I get out of it, or how high or low morale may be at a given time — if the very value of our diaconate depends upon those external forces, however dominant they may be; if, in a word, my value depends on what I do, sooner or later we’ll get frustrated, cynical, exhausted, crabby, bored, and tempted. “Our value must come from who we are.”

Joe knew that better than any deacon I know. He lived it.

God bless you, Deacon Joe Marotta.  Thank you for being my friend.

Pray for him, folks, please. Pray for his young wife and children and all those who love him.  Say a rosary. Light a candle. The world is a little darker today.

UPDATE: The local paper in Lynchburg has a news item about Joe’s death. Andhis parish website has the news, along with a request for prayers. 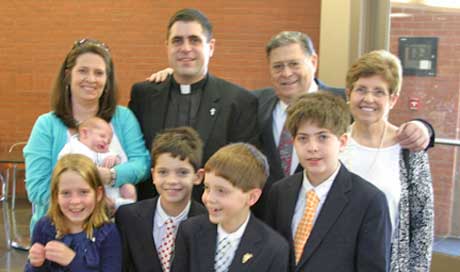