Beautiful: how a mother returned to the Church when her son became a priest 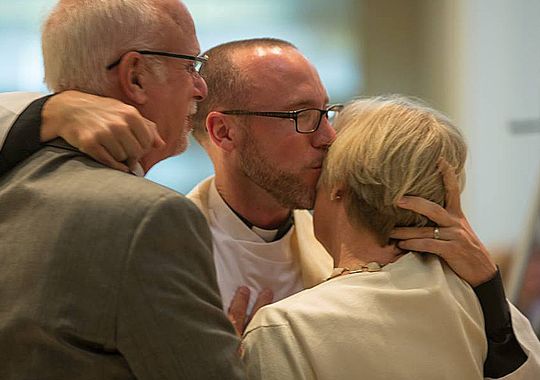 This belongs in the Writing Straight With Crooked Lines file…the story of a mother, Kristin Gilger, who left the Catholic Church, and how God drew her back through her son.

A Jesuit reader sent this to me this morning, and it’s just great:

When my son, Patrick, first told us he was considering becoming a Jesuit, I chalked it up to age (he was 20) and idealism (he was 20). I thought it was a romantic notion that would pass soon enough if I just nodded my head and said what good parents are supposed to say, namely, “I support you no matter what you decide to do.” I did my best to be patient. What other option did I have unless I wanted to be like the mother of St. Thomas Aquinas, who has gone down in history as the woman who locked her son in a tower to prevent him from becoming a Dominican priest? With no tower available, I relied on time. I thought perhaps this whole religious thing was something Patrick just needed to get out of his system. It would be like a love affair that he would look back on with a certain amount of nostalgia but little real regret. That’s not what happened. Patrick entered the Jesuits at the age of 21, right after graduating from college. Ten years and ten months later, he was ordained in a ceremony replete with incense and chants and young men lying prostrate on the floor. There were songs sung in English and Latin, psalms and more incantations; and it seemed to me that every movement, every word, was pitch-perfect, the result of centuries and centuries of practice. Patrick could not have been happier. And I was happy for him, although it did not mean I had entirely reconciled myself to his vocation or to the institution of the Catholic Church. I was raised Catholic, as was my husband. We came from observant families who went to church every Sunday, fasted on Fridays and occasionally prayed the rosary. When we married, it was in the Catholic Church, and when we had children, they were baptized in the Church. It was after Patrick’s First Communion that we decided to leave. We felt strongly that our children needed a spiritual foundation, but I was no longer comfortable with the Church’s teachings on issues like birth control. I was tired of feeling as if I, as a woman, wasn’t valued. It seemed to me that I could be a feminist or I could be a Catholic, but I could no longer be both. We joined an Episcopalian Church, which felt familiar in its rituals but more accepting in its teachings. These Episcopalians embraced birth control, married clergy and female priests. They welcomed gay members, valued a decent choir and said as little as possible about abortion. Our children went to church and Sunday school classes, sang in the choir and competed to be angels in the Christmas pageants. Patrick attended confirmation classes and at the age of 12 became an official member of the Episcopal Church. We had put the Catholic Church behind us for good. Or so I thought.

And, of course: Happy Mother’s Day!