Bishop on new deacon: “The most remarkable path of anyone I have ever ordained” 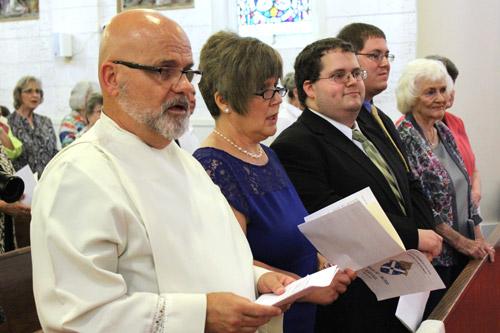 Next step: the priesthood.

“Wait, no, that’s not right.” So said Bishop Anthony B. Taylor during the Promise of Elect, as before him stood Norman McFall, a seminarian over whose diaconate ordination Mass Bishop Taylor was presiding May 20. “That’s the one about celibacy,” Bishop Taylor said, leafing through a large leather-bound book containing the various prayers and charges of ordination. “We’re not doing that one.” The lighthearted gaffe — during which McFall jokingly wiped his brow in mock relief — underscored the surreal picture playing out in front of family, friends and row upon row of diocesan priests, deacons and seminarians at St. Joseph Church in Pine Bluff. McFall, a 58-year-old former Free Will Baptist minister, with wife and adult son on the front row, was about to take the last step before his priestly ordination next year. A path, as Bishop Taylor said in the opening lines of his homily, “the most remarkable of anyone I have ever ordained.” “You … had the integrity to listen to Jesus speaking in your heart and the courage to follow where he was leading you, as difficult as that was, humanly speaking,” Bishop Taylor said.  “You were able to do this because you had experienced Jesus’ love, about which he speaks so eloquently in the Gospel reading you have chosen for your ordination: ‘As the Father loves me, so I also love you. Remain in my love.’” “Everything here is nostalgic and present as well,” McFall told Arkansas Catholic. “Years ago, when I was a Baptist pastor here in town, I just felt really drawn to the Catholic Church. I came over here during Lent and I asked in the office if I could come in the nave and walk around and look. “I remember just walking around, the statues were covered in purple. I had no idea what I was doing here, but I just knew God was drawing me here.”