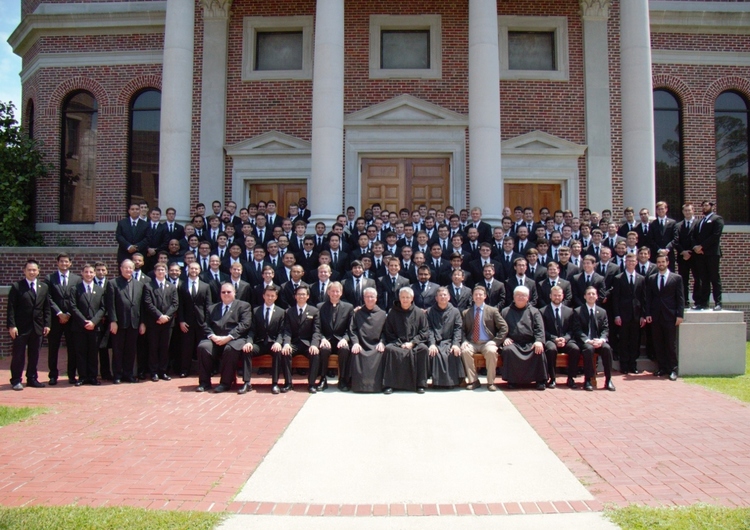 The Francis Effect?  Maybe.  From the web page of St. Joseph Seminary in Covington:

Saint Joseph Seminary College, located near Covington, La., welcomed a record 137 students this year for the Fall 2015 semester, an 83 percent increase from just five years ago, when 75 seminarians enrolled. Saint Joseph Seminary College is a community of faith and learning in the liberal arts rooted in the Benedictine tradition that promotes the development of the whole person. The formation program fosters the commitment of seminarians to the Roman Catholic priesthood in accordance with the United States Conference of Catholic Bishops’ Program of Priestly Formation. The Seminary College also supports preparation for service in lay ministries and makes available its educational and other resources to the local community. Fr. Gregory Boquet, O.S.B, president and rector of the seminary college, credits not only the presence of the Benedictine community to the growing student body over the years, but also the reputation of the baccalaureate and pre-theology programs. “Our seminarians not only have the opportunity to live, learn and grow spiritually alongside the Benedictine community, who have made this their home since 1889, but also benefit from a stellar group of faculty and staff who are dedicated to making sure students achieve their full potential,” Boquet said. “We realize the decision to attend Saint Joseph Seminary is a defining moment for students and strive to make sure everybody is on the right path. This sentiment goes a long way with our students and is a big part of the reason so many young men decide to pursue their education here,” Boquet added. One of those young men who didn’t take the decision to attend Saint Joseph lightly is Luke Mayeux, a second year seminarian from Orange, Texas. Mayeux believes that the enrollment has increased so much within the last few years because of the growing awareness of the need for priests that young men are witnessing today. “I truly believe that most guys have a genuine desire to do something with their lives that is greater than themselves. The priesthood is just that,” Mayeux added. In addition to Mayeux, students this year are representing 20 archdioceses and dioceses from across the Gulf South region, including: Atlanta, Ga.; Galveston-Houston, Texas; Mobile Ala,; New Orleans; Alexandria, La.; Austin, Texas; Baton Rouge, La; Beaumont, Texas; Biloxi, Miss,; Corpus Christi, Texas; Dallas, Texas; Fort Worth, Texas; Houma-Thibodaux, La.; Jackson, Miss.; Lafayette, La.; Lake Charles, La.; Memphis, Tenn.; Shreveport, La.; St. Augustine, Fla.; and Victoria, Texas. Joseph Hastings, a senior from Memphis, Tenn., thinks word of mouth plays a large role in the decision for students across the South to visit campus and eventually make it their second home for four years. “Another cause for the increase is the example that Pope Francis is setting for the world. He not only preaches the Gospel, but he goes out and lives it; by encountering people in the streets. He’s an example of what a true shepherd is called to be, a man of prayer and action, and this example is attractive to men everywhere,” Hastings said.