“Catholics for Choice” bakes a cake for Planned Parenthood 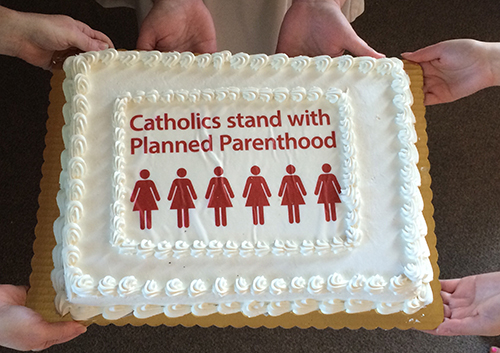 From the group’s press release:

Women’s health clinics across the country will again be harassed by the antichoice movement this weekend. In response, Catholics organized to remind clinic staff that we stand with Planned Parenthood and support the important work they do. Today, Catholics for Choice delivered cakes and messages of goodwill to women’s clinics on behalf of Catholic supporters, showing that only a small minority of Catholics agree with the extremist voices of the bishops on the question of abortion. “It is clear that Catholics support Planned Parenthood and reject the extremist rhetoric and dirty, underhanded tactics of the antiabortion lobby,” said Jon O’Brien, president of Catholics for Choice. “We wanted clinic workers, doctors and nurses to know that we stand with Planned Parenthood and the women they care for.

Unfortunately, for the pro-abortion group, it is unlikely that the majority of Catholics agree with their radical views on abortion; and it is even more unlikely that Catholics look favorably upon Planned Parenthood’s practice of dismembering babies and selling their organs for profit. The truth is the Catholic Church’s teaching on abortion is clear, and in 2013, Pope Francis reiterated that they will never compromise on their opposition against it. He said, “I want to be completely honest in this regard. This is not something subject to alleged reforms or ‘modernizations’. It is not ‘progressive’ to try to resolve problems by eliminating a human life.”

Lest we forget: morality is not subject to the whims of popular opinion. Evil remains evil, and sin remains sin—no matter how strenuously its proponents attempt to sweeten it.

As the church teaches:

Since the first century the Church has affirmed the moral evil of every procured abortion. This teaching has not changed and remains unchangeable. Direct abortion, that is to say, abortion willed either as an end or a means, is gravely contrary to the moral law Formal cooperation in an abortion constitutes a grave offense. The Church attaches the canonical penalty of excommunication to this crime against human life. “A person who procures a completed abortion incurs excommunication latae sententiae, “by the very commission of the offense,” and subject to the conditions provided by Canon Law. The Church does not thereby intend to restrict the scope of mercy. Rather, she makes clear the gravity of the crime committed, the irreparable harm done to the innocent who is put to death, as well as to the parents and the whole of society.

Catholics for a Free Choice “has no affiliation, formal or otherwise, with the Catholic Church,” according to the Administrative Committee of the National Conference of Catholic Bishops. The committee said that during the August visit by Pope John Paul II to World Youth Day in Denver, “programs about dissent in the Catholic Church often included a spokesperson for a group calling itself Catholics for a Free Choice. Both before and since World Youth Day, because of CFFC’s presuming to speak for American Catholics and because of the attention the media have paid to the group, many people, including Catholics, may be led to believe that it is an authentic Catholic organization. It is not.a’