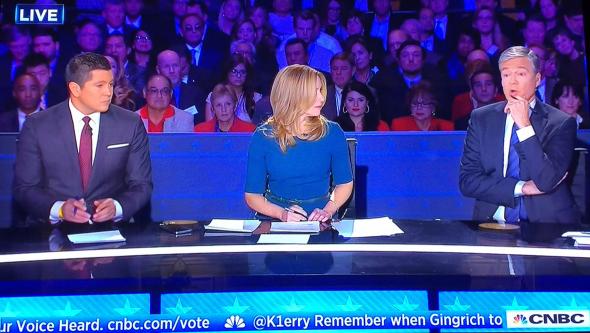 Remember this headline from The New York Times?:

CNBC May be the Big Winner of the Next Republican Debate

But 48 hours later, this is what the world—even in the left-leaning media—is saying:

I noted on Facebook, and I’ll just restate it here: CNBC, you did more than just damage your own brand with questions that were frivolous or badly prepared. (Becky Quick quoted Trump and then, when he denied her assertion, was forced to say, “Well, er, uh, where did I read that…?” Huh?).You handed Ted Cruz an opportunity to rant about media bias—and, in the middle of last night’s jaw-dropping spectacle, no one could disagree with him. He was right. The media in general ended up looking foolish—and, I’d argue, that does more than hurt your ratings. It hurts a valuable component of our democracy, a robust free press. When that suffers, we all suffer.

The moderators were evidently going for “edgy” or “provocative”—trying to turn economic and financial subjects and statistics into a snarling grudge match.

But the result was (as a former TV colleague of mine would describe these things) “one hot mess.”

Yeah. That says it.

Good luck cleaning it up.