Did the visit of Pope Francis affect John Boehner’s decision to resign? 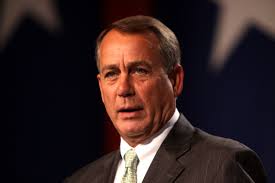 Talking heads have been wondering about that this morning, and CNN has this fascinating detail:

Boehner, who has presided over the House since 2011, explained during a closed-door meeting with Republicans Friday morning that he had only planned to serve two terms as speaker but decided to hold onto his post after then-House Majority Leader Eric Cantor lost his seat during a primary last year, a Republican lawmaker in the room told CNN.

Boehner, who didn’t speak to reporters on Friday, also told the lawmakers that Pope Francis’ visit to Congress the day before was a crystallizing moment, according to the lawmaker. Boehner then read the prayer of St. Francis to the conference after announcing his decision.

“After yesterday with the Pope, he decided to leave on this high note,” a top Boehner aide told CNN. “Literally did not make the decision til last night.”

Boehner, of course, is the highest ranking Catholic in congress, and has deep Catholic roots: he was born the second of 12 children in Ohio and studied at Xavier University. It’s widely known that he has been working for years to get a pope to address Congress. Yesterday’s historic speech may be, to him, the capstone of his career. Small wonder that he spent the first moments of the pope’s talk in tears.