Last night, I was one of many who received the following email from Msgr. Charles Pope, well-known blogger and writer in the Archdiocese of Washington:

Just a brief note to inform you that I have been blocked from Facebook. They claim that Msgr. Charles Pope is not my real name and are requiring me to submit government ID proving that Msgr. Charles Pope is my true identity. As of now, I have no intention of doing this since I consider it an unreasonable demand by them. They further indicate that even if I supply the IDs from at least two sources, that they reserve the right not to reactivate my account if the name I have used does not meet their preferences. 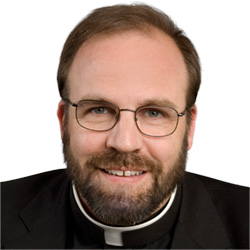 They explain the reason for their action as: We ask everyone on Facebook to use the name they go by in everyday life so friends know who they’re connecting with But of course this IS the name that I go by “in everyday life.” Further, I have had a Facebook account under the name of “Msgr. Charles Pope” for over 6 years now. This is my name, this is who I am. I have 5,000 friends on Facebook who know me by this. Facebook of course is a private company and they can do whatever they want and treat their clients and users in whatever foul ways they wish. But my current stance on this matter is to resist their demand and seek to share my dissatisfaction. Facebook was once an open forum to discuss and share. It has become increasingly autocratic and ideological. It may be time for many of us to encourage them to reform or to simply leave Facebook. I respect that some of you may differ with my assessment of things, but I did want to explain my sudden absence from Facebook and I request your help in spread this information with others you think might wonder as to my disappearance from that forum. My Twitter Feed is @MsgrPope

We’ve seen this sort of thing before. I wrote about it in February, when Facebook blocked me.

A mutual friend this morning asked me what we could do about it. Not much, I’m afraid. This issue has gotten considerable attention since it first surfaced several months ago, and various public complaints haven’t done much good. It’s Facebook’s candy store; they can run it however they wish. But it strikes me as bad business, and bad policy—engendering a lot of ill will and hostility, not to mention a fair amount of negative press.