Found in translation: meet the pope’s English translator, bracing for the spotlight

From The New York Times:

On a blustery day in January this year, Pope Francis appeared before thousands of worshipers in Tacloban City, the Philippines, and asked for permission to give his address in Spanish. 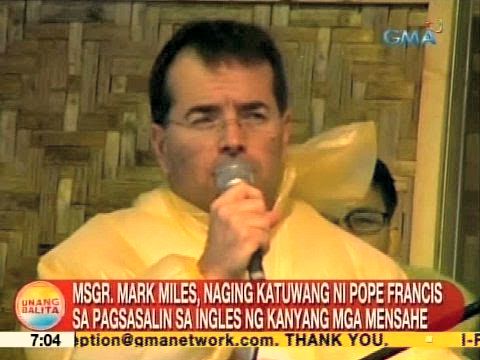 “I have a translator, a good translator. May I do that? May I?” he asked in heavily accented English. When the crowd cheered its approval, Msgr. Mark Miles — a trim, bespectacled official from the Vatican’s Secretariat of State — discreetly materialized at the pope’s side and began expertly echoing the pope’s speech in English, keeping time with his pauses and his expressiveness, too.

The pope did not want to use a “professional translator that hides in the wings and is only a voice,” said Cindy Wooden, the Rome bureau chief for the Catholic News Service and the author of a recent book on Cardinal Luis Antonio Tagle, the archbishop of Manila. Instead, Francis went out of his way to show “affection and esteem for Monsignor Miles” because the pope wanted to be able to speak from his heart, Ms. Wooden said. Overnight, Monsignor Miles became a star in the Filipino blogosphere. And he is likely to become a familiar figure to Americans when Francis visits the United States this month.

Of the 18 addresses, speeches and homilies the pope is expected to deliver during his six-day visit to Washington, New York and Philadelphia, only four will be in English, the Rev. Federico Lombardi, a Vatican spokesman, said at a news conference on Tuesday. The rest will be in Spanish.

And though the Vatican said subtitles would be used in some cases, it is more than likely that, as in the Philippines, the pope will rely heavily on Monsignor Miles on this trip to turn his comfortable Spanish into smooth English.

The pontiff’s two immediate predecessors were high-profile polyglots. St. John Paul II knew a dozen languages and spoke more than half of those fluently, and Benedict XVI, the pope emeritus, is said to be fluent in five languages, as well as classical Latin.

Pope Francis has more modest linguistic leanings. Born in Argentina, a descendant of Italian immigrants, he is fluent in Spanish and Italian, conversant in German, French and Portuguese, and, to a lesser degree, capable in English.

“He’s very shy about not knowing English — he knows Italian and Spanish very well,” Cardinal Timothy Dolan of New York said at an interfaith event in New York in May. “His English is a little better than he lets on. But he’s not conversational in English.”

The pope uses English so rarely that his first public address in English — a video message to a conference — merited note in the Catholic press.

All things considered, Monsignor Miles should have plenty of occasions to shine this month.