The news has been hurtling around the world tonight on Twitter: 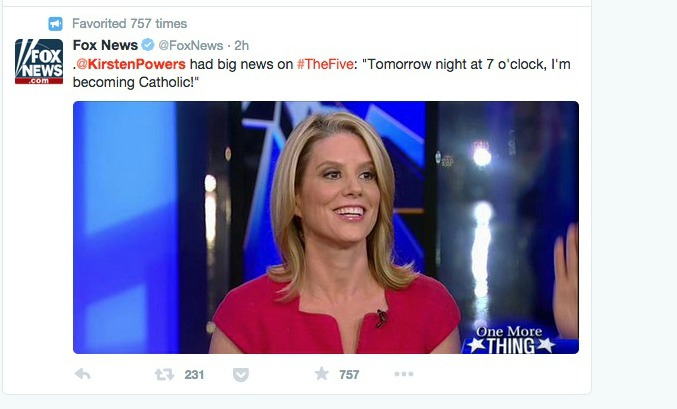 About Powers, from her Wikipedia page:

Kirsten A. Powers (born 1969) is an American political pundit and analyst. She began her career as a Democratic Party staff assistant with the Clinton-Gore presidential transition team in 1992, followed by an appointment as Deputy Assistant U.S. Trade Representative for Public Affairs in the Clinton administration from 1993-1998. She subsequently worked in various roles including press secretary, communications consultant and party consultant. She also serves as a columnist to USA Today, Newsweek and The Daily Beast, and a contributor on Fox News. Powers wrote a column for The American Prospectand her numerous articles have appeared in USA Today, Elle, the New York Observer, Salon, and the Wall Street Journal. In 2005 journalist Ben Smith wrote that Powers was “emerging as one of the Democratic Party’s national voices.” …Powers supports comprehensive immigration reform and providing a path to citizenship for illegal immigrants, favors gun control, and supports civil unions for LGBT Americans, and marriage strictly as a religious institution. She opposed the “don’t ask, don’t tell” military policy, and supports closing Guantanamo Bay and putting prisoners in federal prisons. She opposed the Iraq war, the Fairness Doctrine, and a constitutional amendment to ban flag burning. She also opposes the death penalty. She supports the right of countries to choose their own governments free of outside influence but is against the establishment of theocracies. Powers had a particular concern over the influence of Islamists in Egypt due to her former husband being of Coptic Egyptian origin. Powers promotes the anti-abortion movement, and in 2011 published a piece in The Daily Beast promoting the theory that access to birth control does not prevent abortions, which she later admitted contains “a serious error” that “invalidates” her piece. She has called for Planned Parenthood to be shut down. Powers opposes elective late-term abortions. Powers was raised as an Episcopalian but spent much of her early adult life as an atheist. In her mid-30s, she became an evangelical Christian. The process of conversion began when she dated a religious Christian man, who introduced her to the Redeemer Presbyterian Church in New York City and the teachings of its pastor, Tim Keller, and culminated in an experience in 2006 when, during a trip to Taiwan, she believes that she was visited by Jesus. She has called her conversion “a bit of a mind bender” due to her political beliefs and former atheism, and prefers the term “orthodox Christian” over “evangelical” to describe herself, given the “cultural baggage” around the word “evangelical”. She has said that the biggest impact her new-found faith had on her political beliefs was that she came to “view everyone as God’s child and that means everyone deserves grace and respect.

Welcome home, Kirsten. Always nice to have another Terp on the team!