From the Synod: “Are there new ways of using the permanent diaconate and those who are permanent deacons to be ministers and bearers of mercy?”

At a recent press conference (6 October 2015) held in Rome highlighting some of the points raised thus far in the Synod, Father Thomas Rosica summarized one particular area of special concern for deacons.  As phrased by Father Rosica, some Synodal Fathers were asking, “How can the permanent diaconate come to the aid of so many people who are in need of mercy?  Are there new ways of using the permanent diaconate and those who are permanent deacons to be real ministers and bearers of mercy?” 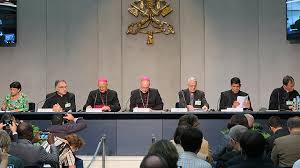 Here is a
link to the full press conference
.  Father Rosica’s brief questions on the diaconate begin at about 24:08.

“Are there new ways of using the permanent diaconate and those who are permanent deacons to be real ministers and bearers of mercy?” Here I sense several significant opportunities: First: Notice the distinction he makes between the diaconate itself and those of us who are deacons.  This suggests that there is interest in the very nature of the diaconate, the fundamental core of the Order. Second: What are the possible “new ways” of using the diaconate?  Taking just one example: might there be a re-opening of the question of deacons anointing the sick under certain circumstances, perhaps?  Most of the ways we can be used are already included in our canon and liturgical law, so something “new” would seem to be suggesting a willingness to look at things not previously considered.  I am using Anointing of the Sick only as an example here; I am not promoting it or suggesting that this is what is being suggested at the Synod.  But if the bishops are open to looking at “new ways” of using deacons, what might come up in the discussions?

That’s for starters. Read the rest.

The Anointing of the Sick comes up often in conversation about diaconal ministry. Rome decided a few years back that this sacrament was to be confined only to priests or bishops. (I posted about this again last month; check out this link.)  But while leading a retreat last weekend in Montana, I was struck by the serious need in some parts of the world. In Montana, for example, where there are few priests (and fewer deacons), if someone needs an anointing urgently, it very well will not happen. The ministers of the sacrament are too scarce, and the distance they need to travel too far. Empowering deacons—or even extraordinary ministers of the sacrament—might be helpful. But, as we’ve seen, that seems for now unlikely.