From the Synod: “We do not support a process of admitting the divorced and remarried to the Eucharist” 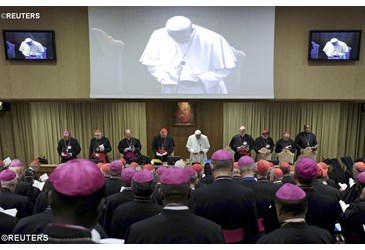 That comment comes from a Polish archbishop who briefed reporters Thursday.

Archbishop Gadecki, President of the Polish Episcopal Conference, and Archbishop Carlos Aquiar Retes of Mexico, were guests at the briefing. Holy See Press spokesman, Jesuit Father Federico Lombardi, told the media that there had been about 93 interventions on Wednesday afternoon and Thursday morning in the General Assembly. …The formation of priests for pastoral accompaniment was addressed. If young men do not have a good experience of family are not given adequate formation and helped to find healing, they will not be be effective ministers. Young men need to be taught the “art of friendship” so that they can accompany families on the pathway to holiness. The issue of the admission to the Eucharist for the divorced and remarried was discussed extensively. Archbishop Gadecki said that the Polish position was clear, “We do not support a process of admitting the divorced and remarried to the Eucharist, we believe in the current annulment process.” He said that there were many ways in which people in second unions could participate in the life of the Church without receiving the Eucharist. “People can participate in different forms and bear witness to the hardships of family life.” Gadecki added that remarried divorcees had the “right to participate” in the life of the Church without receiving the Eucharist. It was reported that some interventions in the Synod Assembly made it clear that admitting remarried people to the Eucharist would not be an “indiscriminate process” but a carefully structured one. Divorce must always be seen as a tragedy for the family. The Church should not punish those who are weak but find ways of helping them. Many of the interventions underlined that it was not a doctrinal change that was sought but a change in pastoral attitude. Archbishop Retes said that the Holy Father has shown the Church what attitude we should have: that of mercy towards everyone. He said that this was the mission of the Church and, in the family, people should “taste” the love of God.